Tag Archives: recipe of the week 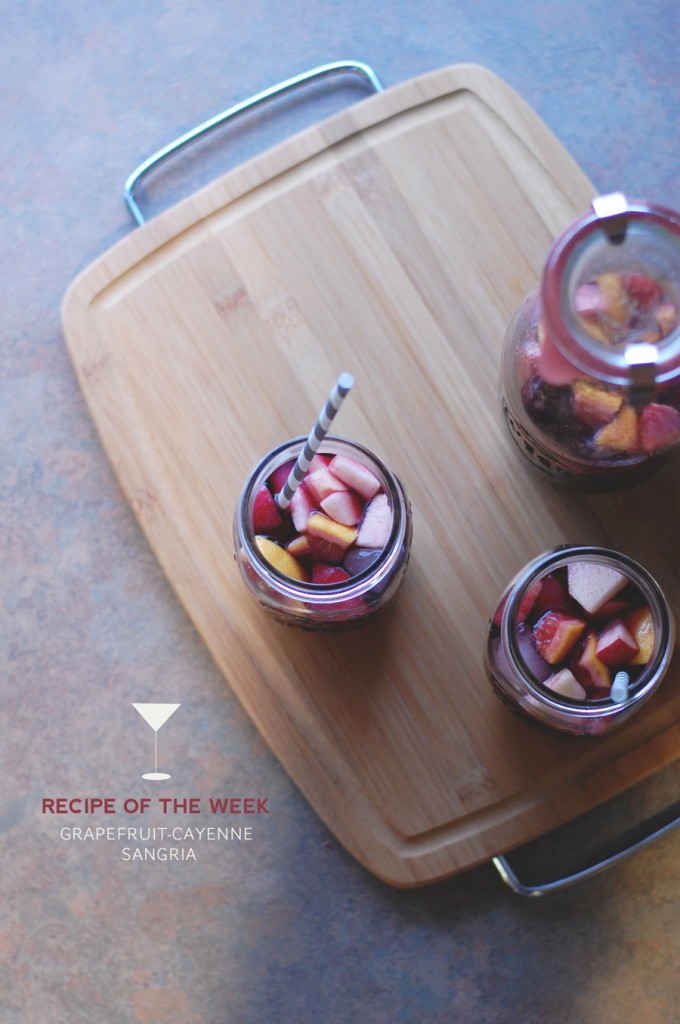 if you live in the midwest, chances are you’re probably pretty ready for spring & summer to be here already. last weekend at lunch, i ordered a blackberry sangria that had a hint of cayenne pepper in it; it was the perfect mix – still a very summery drink, but the heat made it seem a little bit “warmer” for winter. i was inspired to create something similar at home and decided on a grapefruit-cayenne combination, and i think it turned out really well. if you don’t really do spicy, i say give this a try anyways, because you might be surprised. but if you absolutely insist on no spice, just omit it and you’ll still have a delicious, citrusy sangria. 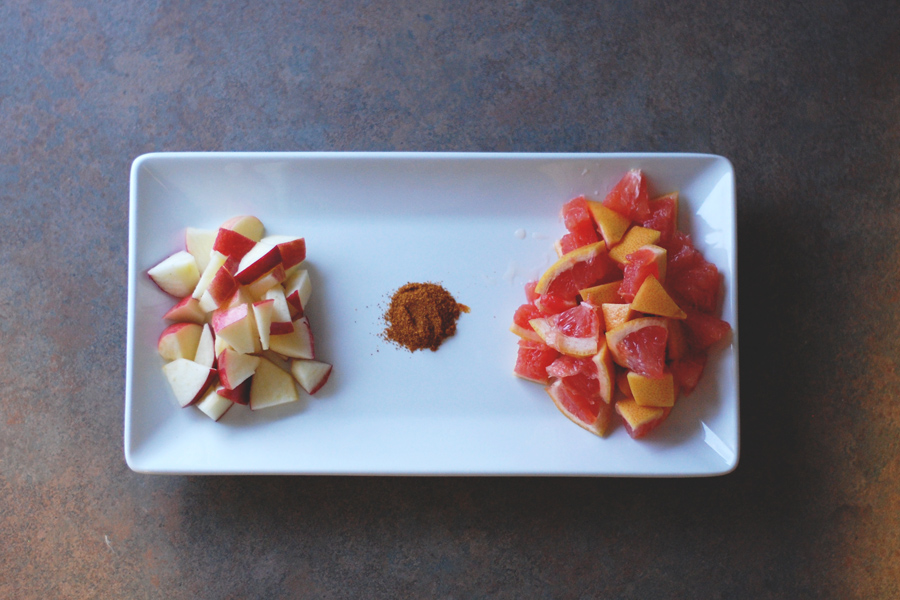 directions:
combine all ingredients except soda in a large pitcher or carafe. fill tall glasses or mason jars with ice, then pour sangria into glasses until about 2/3 full, making sure some of the fruit is added to each glass. top each glass with a few ounces of grapefruit soda and serve with fun straw :) cheers! 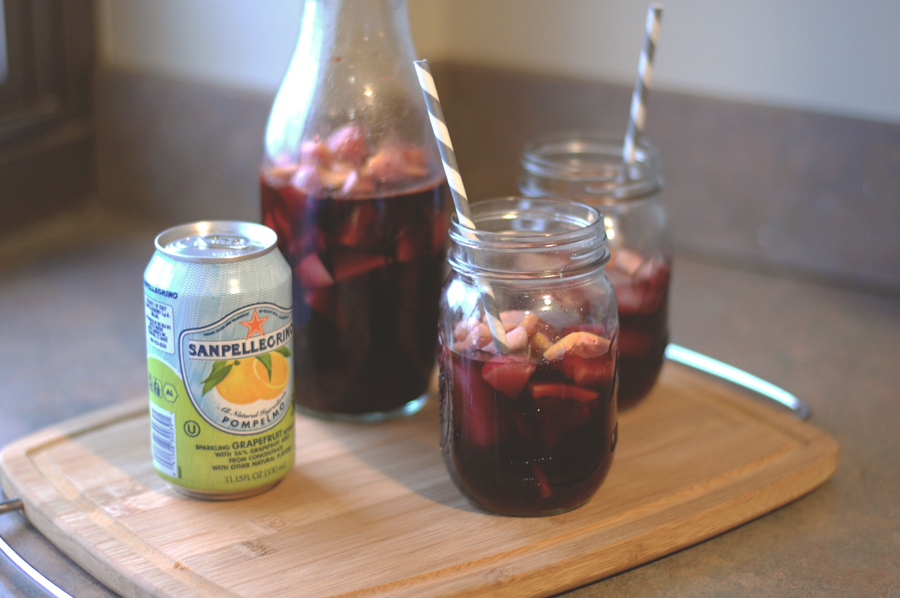 by Hollyanne Posted on February 28, 2013
Posted in food + drink | Tagged cocktails, recipe of the week | Leave a comment 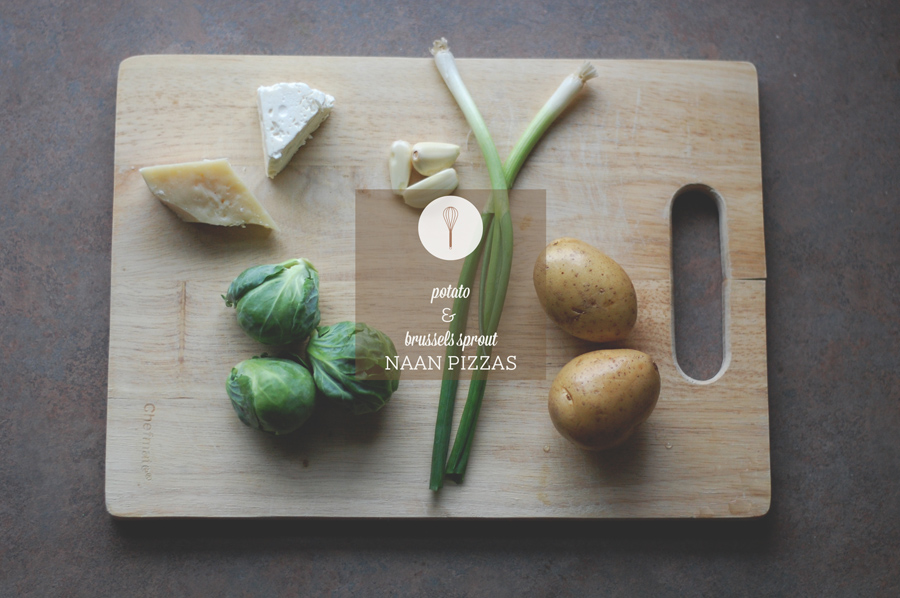 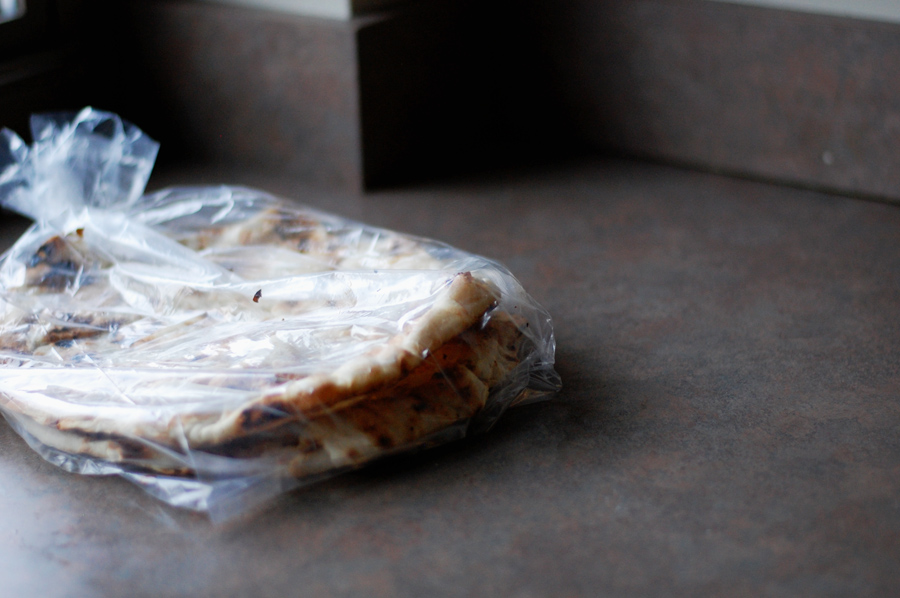 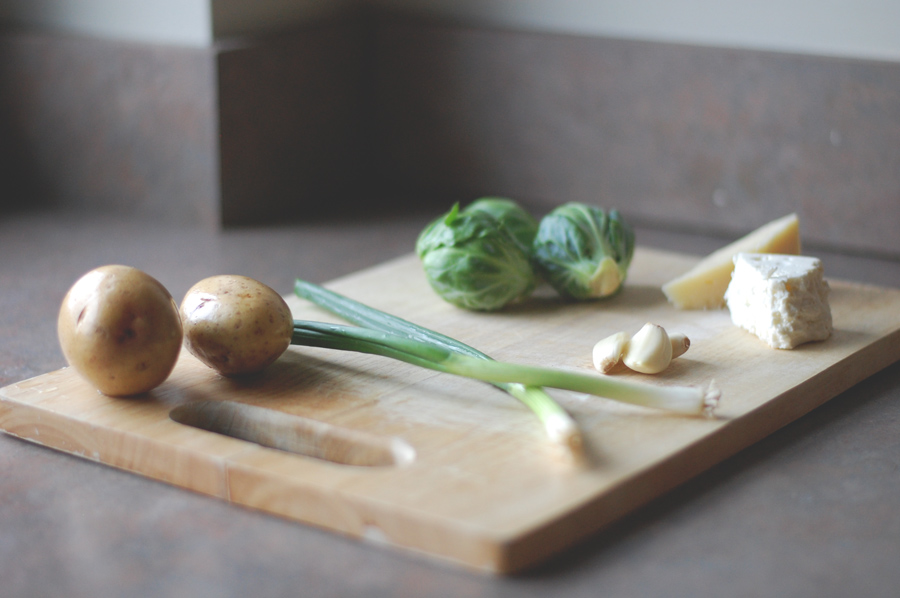 we picked up some fresh naan bread at the farmer’s market in kansas city, and have been making a variation of this pizza for dinner every night this week. although i love most pizzas, i particularly enjoy pizzas like these that don’t have a traditional sauce. by eliminating sauce and minimizing cheese (and meat), it really lets the fresh vegetables and the homemade bread shine as the stars of the meal. there are obviously an infinite amount of variations to these pizzas based on your tastes or what you have lying around, but here’s our favorite version from this week:

directions:
coat the naan with a thin layer of olive oil, then add the minced garlic. next,  add the sliced potatoes in a single layer over the surface of the pizza. add the scallions and shaved brussels sprouts. top with crumbled feta, grated parmesan, salt and pepper.
bake in a preheated 400 degree oven on a greased baking sheet for 8-10 minutes, until naan is golden brown, potatoes are softened, and cheese has melted. 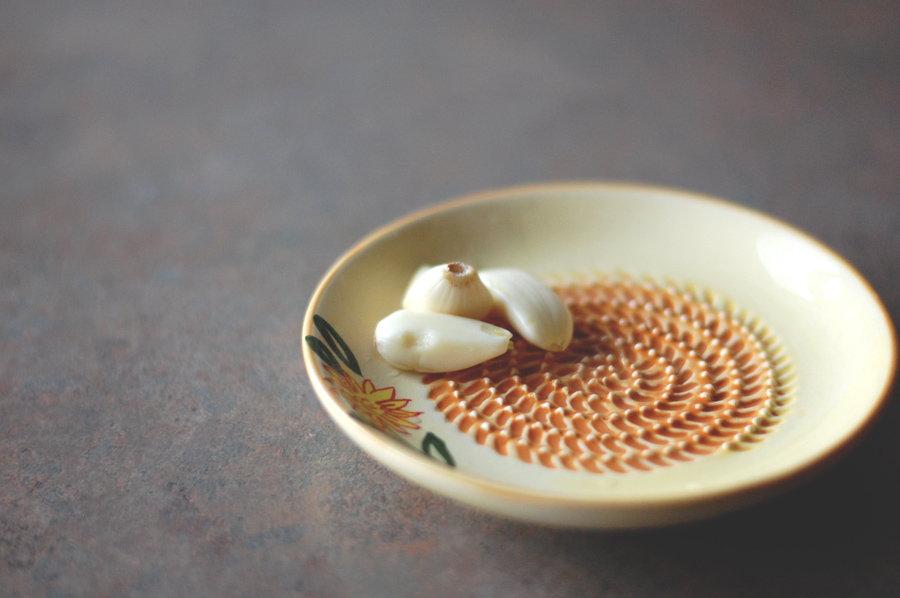 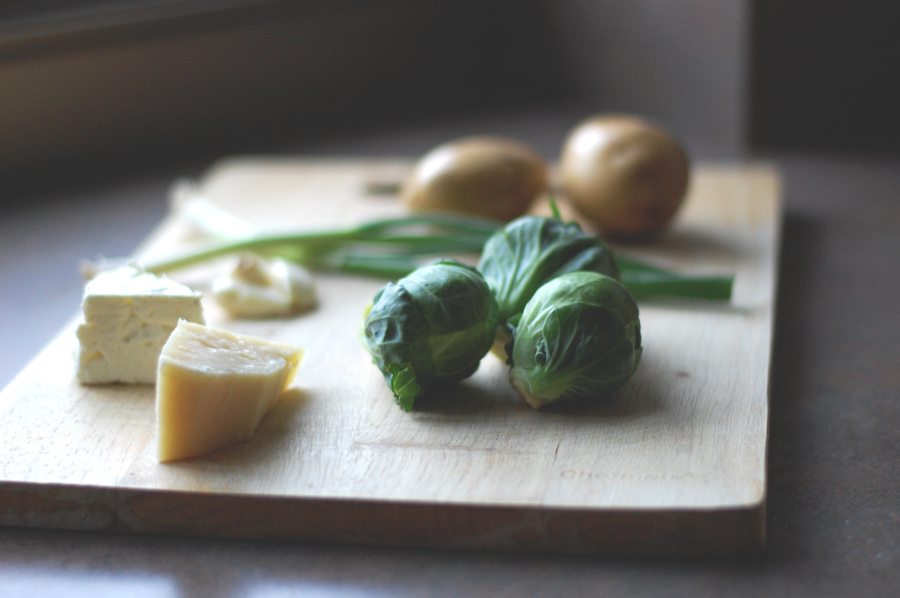 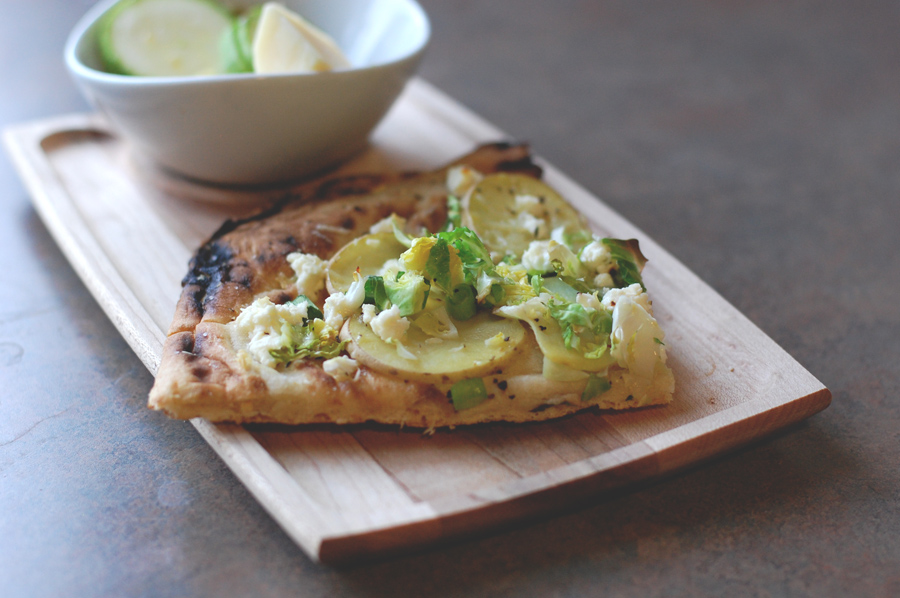 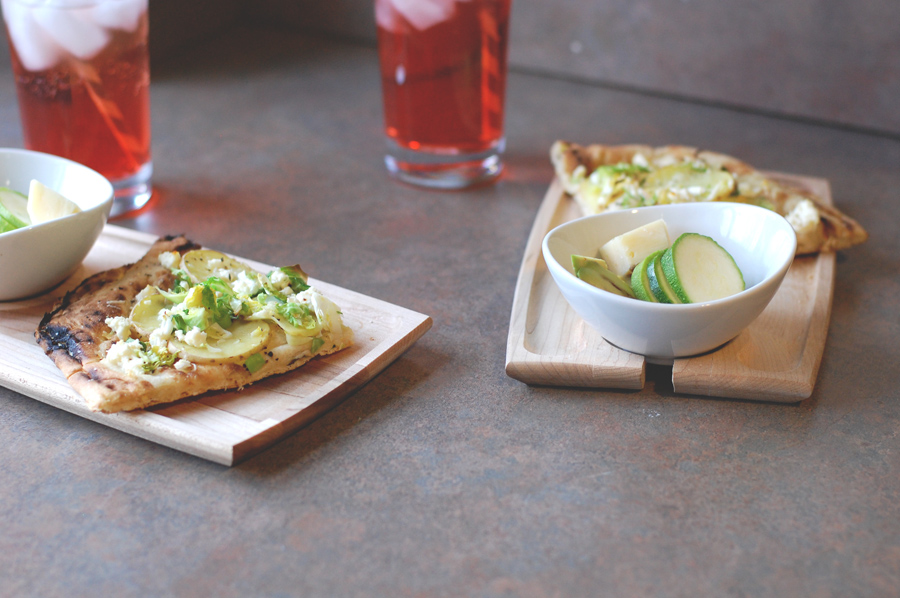 by Hollyanne Posted on February 7, 2013
Posted in food + drink | Tagged eat your veggies, recipe of the week, recipes | 3 Comments 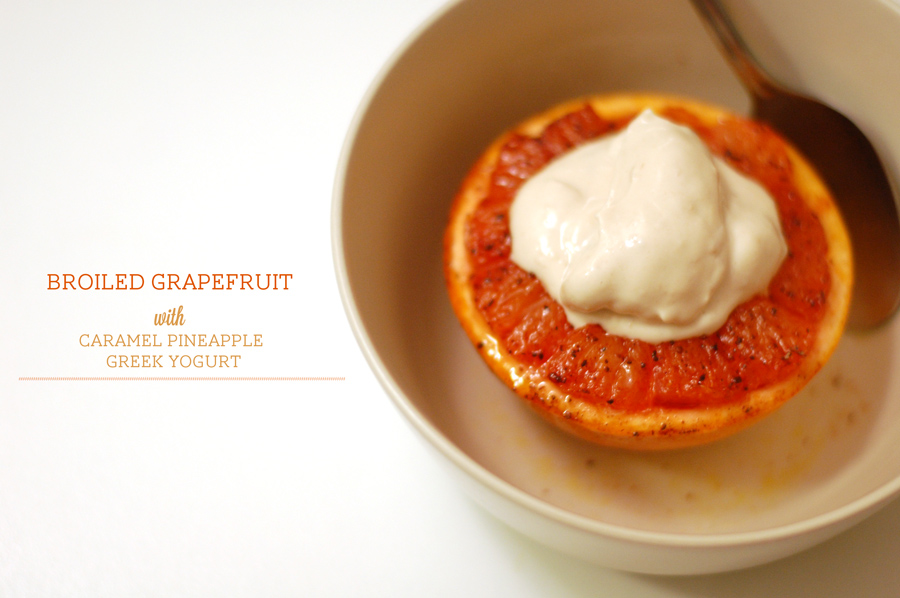 i’ve been seeing quite a few recipes for broiled grapefruits in the winter issues of some of the magazines i read now that citrus is in season. for as much as i love grapefruit, i’ve only ever really eaten it raw and plain, so this seemed like a fun, new thing to try. we’ve made this for the past two nights now, and it’s turned out to be our new favorite dessert. for those of you like me that have to have something sweet every night a couple hours after dinner, this is a nice light and fairly guilt-free way to satisfy your dessert needs. and for those of you who may avoid grapefruit because it’s too sour for your taste, perhaps the addition of melted butter and cinnamon sugar will sway you :) 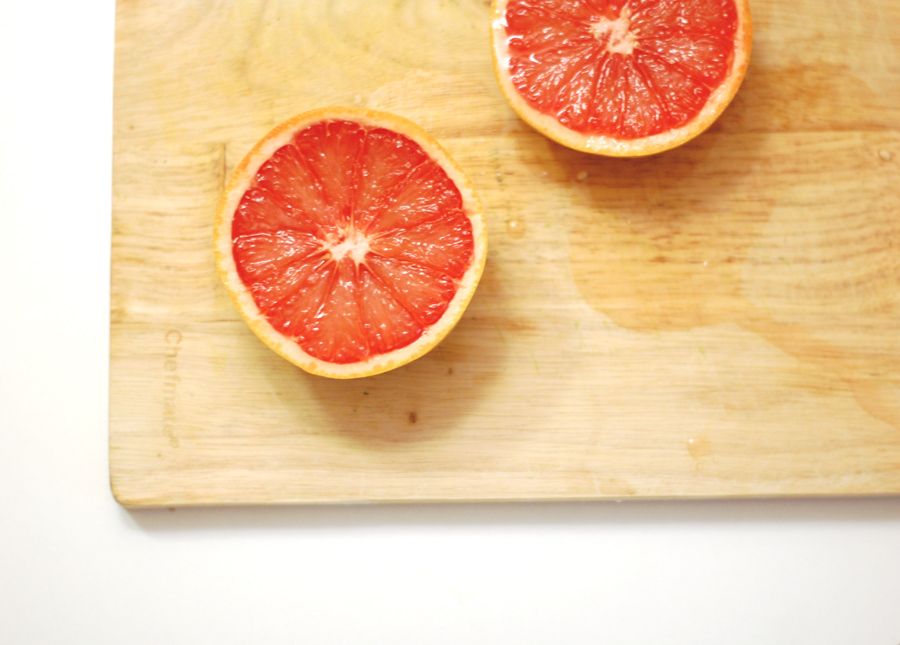 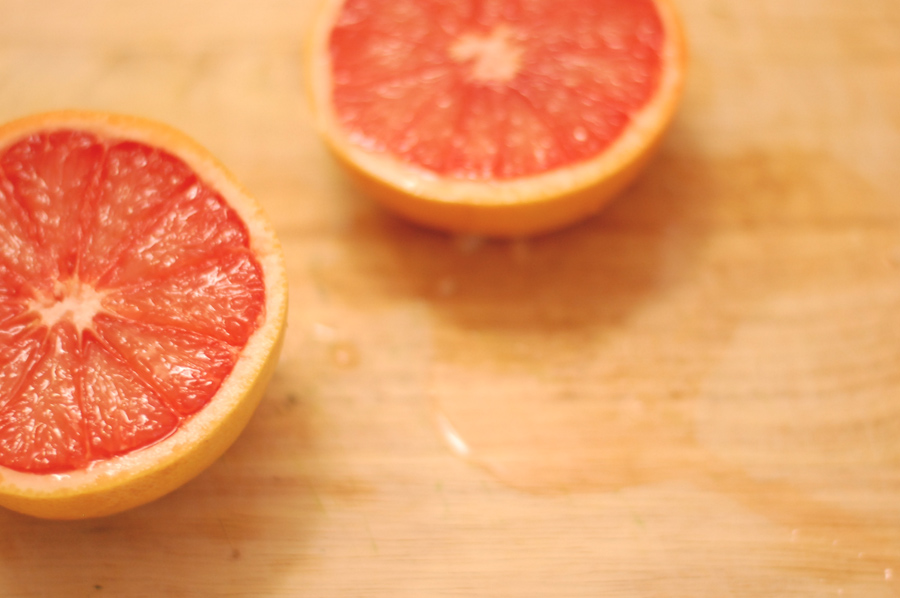 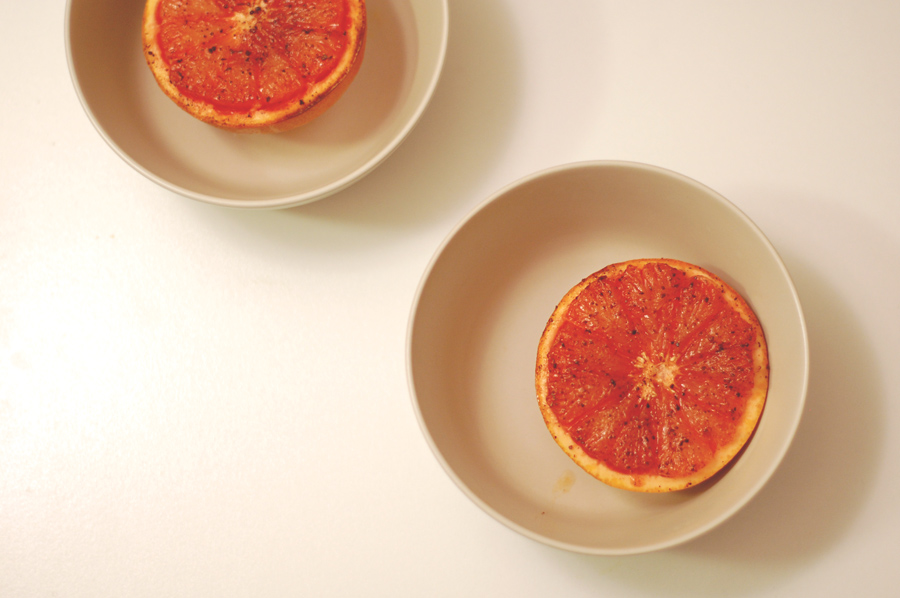 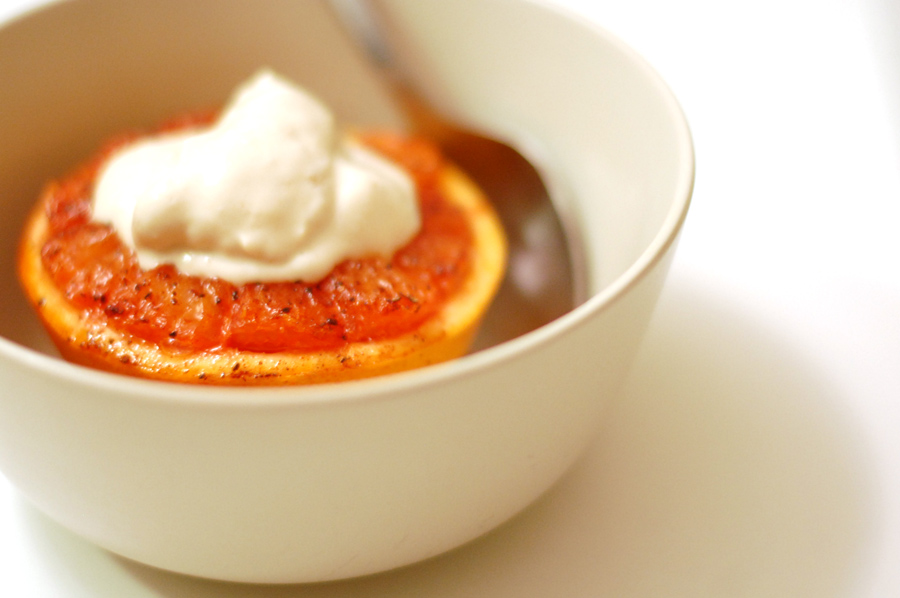 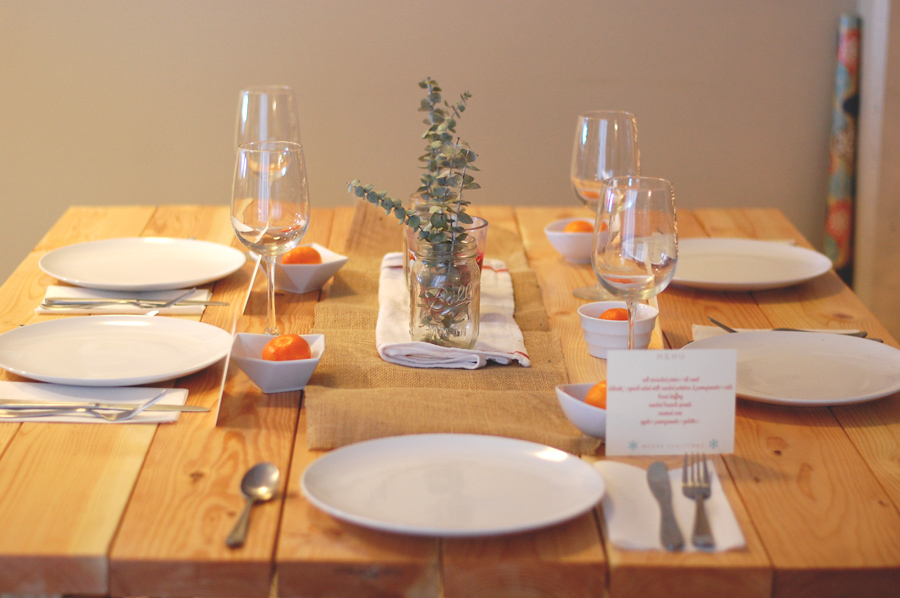 this past christmas, we hosted our very first big holiday meal while my parents and sister were in town. i was admittedly a little nervous about how everything would turn out, considering we don’t have much space and we were down to the wire on making the dining table that you’ll see in these photos. but of course, everything turned out just fine. thanks to my dad and grandpa, the table came together just in time for christmas dinner, and even though it’s a little wobbly and nobody could cut their prime rib without wiggling the entire table, it was pretty neat to eat on a table we had built with our own hands (and lots of curse words). 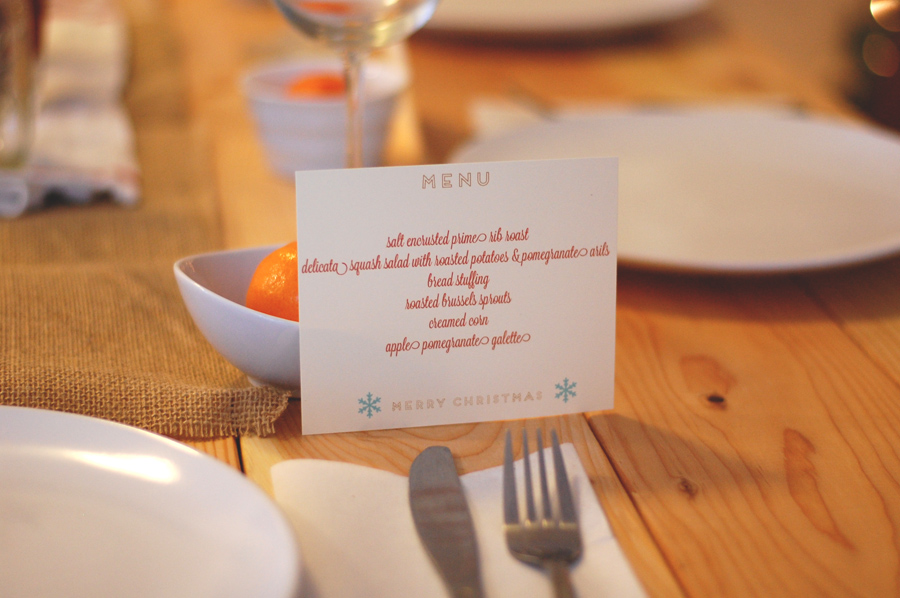 i didn’t come up with any of these recipes, but i thought it would be fun to share what we ate for our big meal as well as some photos  of the food and our new table! 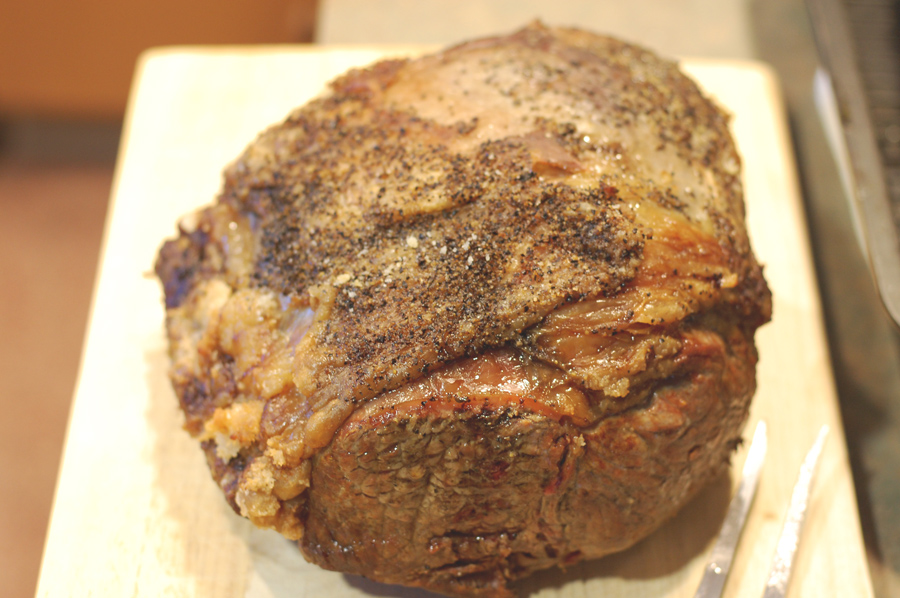 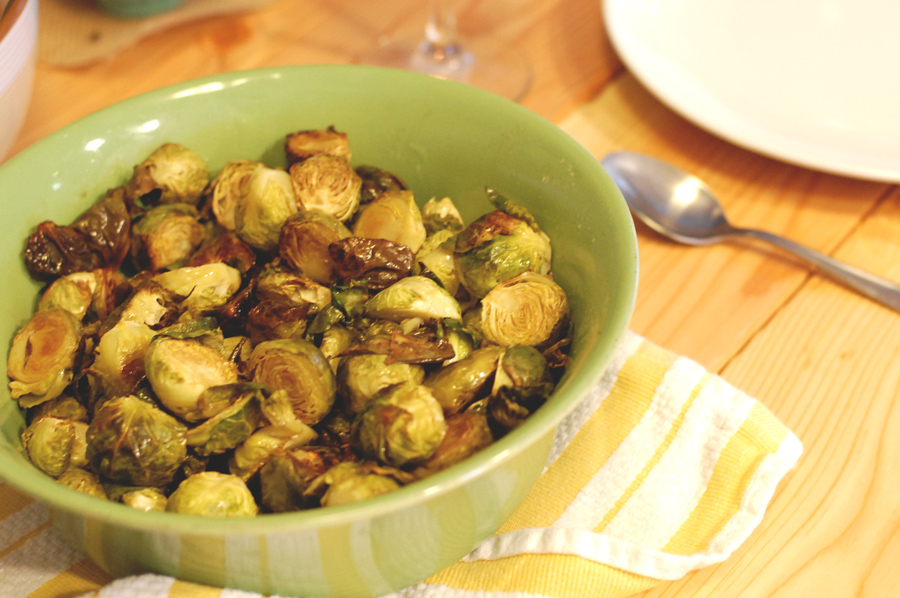 did you and your family try any new dishes for christmas this year? i’m already looking forward to next year’s meal!

by Hollyanne Posted on January 3, 2013
Posted in food + drink | Tagged christmas, recipe of the week, recipes | Leave a comment

today’s thursday, and i normally would share a recipe that i’ve created or adapted that we’ve made and enjoyed recently. since it’s kevin’s birthday, however, and since any birthday/holiday/daythatendsin”y” is basically an excuse for us to celebrate through food, you know we’re planning to consume lots of good stuff today. i thought i’d use this week’s post to share what we’re going to eat (and have already eaten).

this morning, we started off with ricotta pancakes. i saw this recipe posted on one of my favorite blogs just yesterday and immediately knew it was what i was going to make for k’s birthday breakfast. kevin loveeeeessss pancakes. personally, i’ve never been a big fan, unless they’re homemade. we happened to have some ricotta in the fridge from another recipe, so this worked out perfectly. i usually would cook pancakes in butter, but i fried these in oil as the recipe called for and they turned out golden brown and crispy on the outside but super creamy on the inside. we didn’t do them colored/ombre like they did because, let’s face it, boys don’t care if their pancakes are cute and pink, but we might try  it another time. 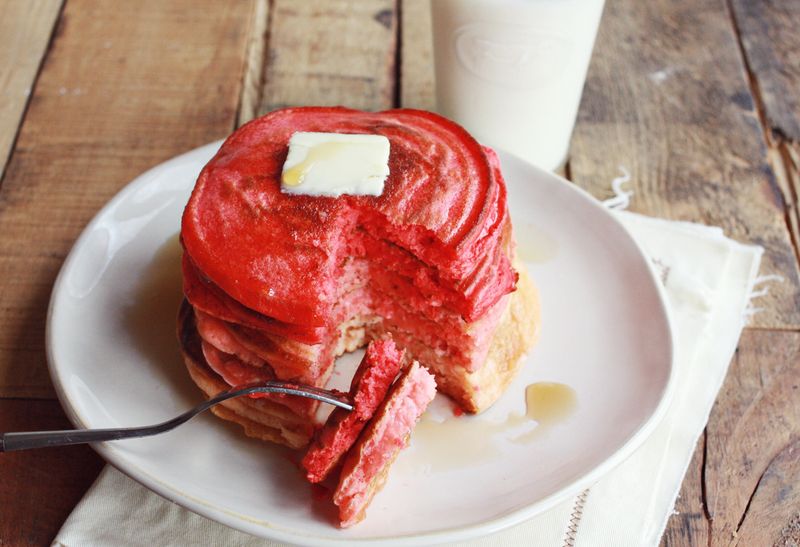 ricotta pancakes via a beautiful mess

when i asked kevin last week what he thought he might like me to make for his birthday lunch or dinner, he immediately told me he wanted lentil sloppy joe’s. we made these for the first time about a month ago, not sure what to expect, but they were actually very, very good. i even liked them better than the real sloppy joe’s. i love that the flavors in the recipe are totally reminiscent of the real ones we used to eat in preschool and growing up, but since it’s with lentils, it’s a lot healthier and definitely unique. i bought some pretzel rolls that we can eat the lentil joe’s on; we’ll be having these when k comes home for lunch today! 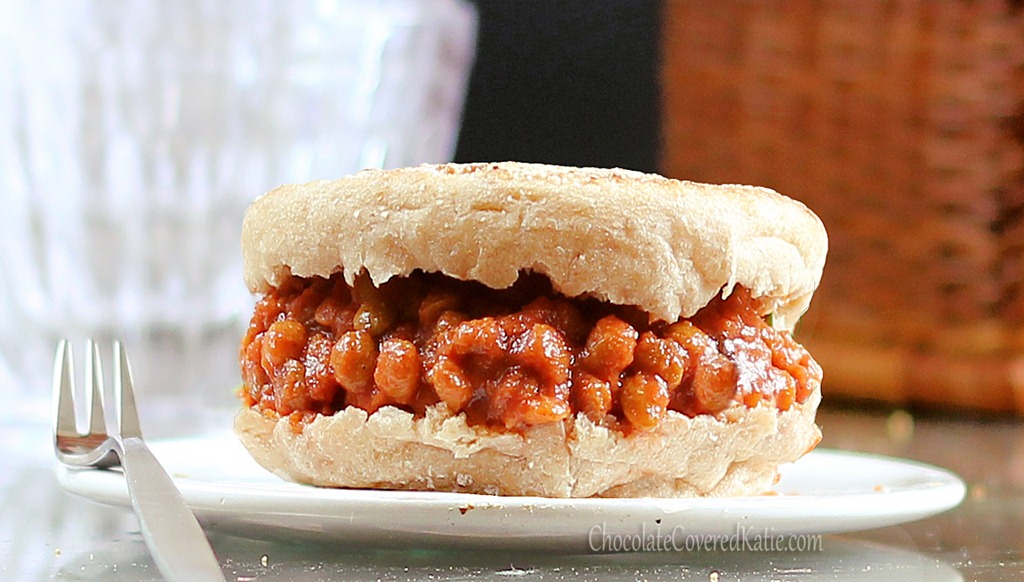 i don’t really know what else to say, except that no celebration in our house would be complete without roasted brussels sprouts. brussies, as we affectionately call them, are basically a religion around here. we’ll probably just roast them simply with olive oil, salt, and pepper, but if i’m feeling a little fancier, i’ll add the shallots and balsamic like the below recipe calls for. oh, and in case you’re in the market for another good brussie recipe (why wouldn’t you be?), we made these last christmas and they were fan.tas.tic. 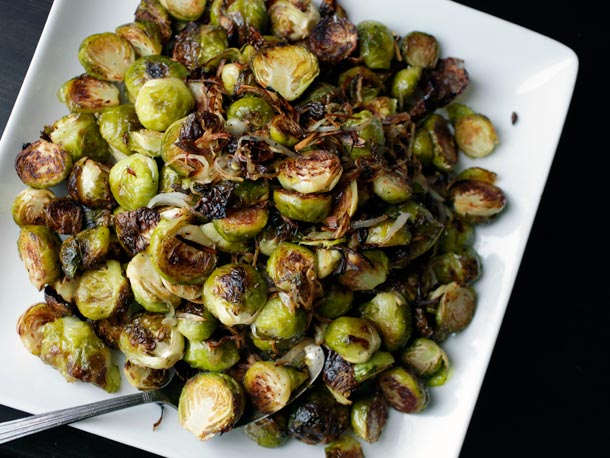 last night we went out to sushi at blue downtown, and decided to get their vegetarian lettuce wraps as an appetizer. i’ve had lettuce wraps at other restaurants before and have enjoyed them, but never at blue. they came with several pieces of lettuce for “wrapping,” along with hummus, brown rice, noodles, cucumber, carrot, cilantro, and sprouts for mixing. they also came with three different dipping sauces – creamy cilantro, yellow curry, and spicy peanut – all of which we were delicious. we decided we’d like to try to recreate these at home for dinner tonight, so we bought some similar ingredients last night at whole foods and are going to give it a shot! there are about a million renditions of lettuce wraps online, but here’s one that looks similar and has some of the same sauces we’d like to try. 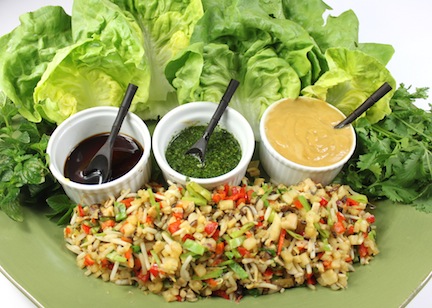 we momentarily considered getting an almond cake from our wedding cupcake baker, but instead decided to do something kinda special and different and try our hand at this gin + tonic cake we discovered on how sweet it is a while back. gin + tonic and gin gimlets are among our favorite cocktails, so we figured DUH let’s put it in a cake. i’ve already got the cake made, and if the how the batter tasted is any indication of how the cake will be, it’s gonna be pretty fabulous. i’m pretty excited to try this tonight…with a gin + tonic on the side, obvi. 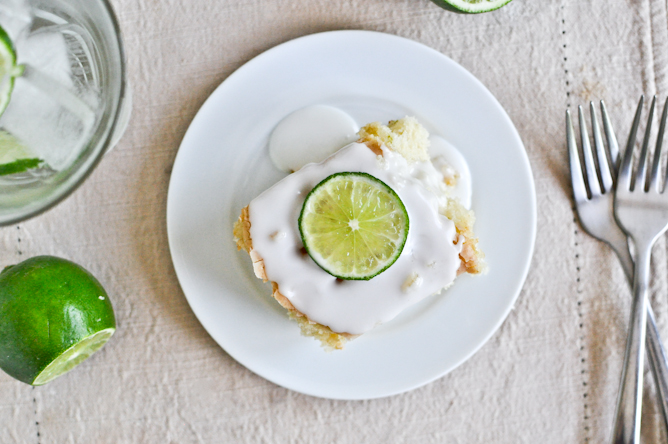 gin + tonic cake via how sweet it is

so there you have it. everything we’re planning to make and eat today to celebrate kevin :) hope you all have a wonderful, cake-filled thursday!