This past Sunday we ran the Lincoln Half Marathon, our 7th 1/2 and our 2nd annual Lincoln. Lincoln is only about 45-60 minutes from Omaha, so perfectly drive-able on the morning of, but since we had decided to rent out our house on Airbnb for the Berkshire Hathaway Shareholder’s Meeting, we had to make a full weekend of it in Lincoln. We headed down Friday after work, and after much hullabaloo checking it at our classy hotel, the Super 8, went to dinner at Momo Pizzeria. Here we had a delicious cocktail, a really yummy pizza and a couple of appetizers, and seriously crappy service. 2/3; it’ll do. 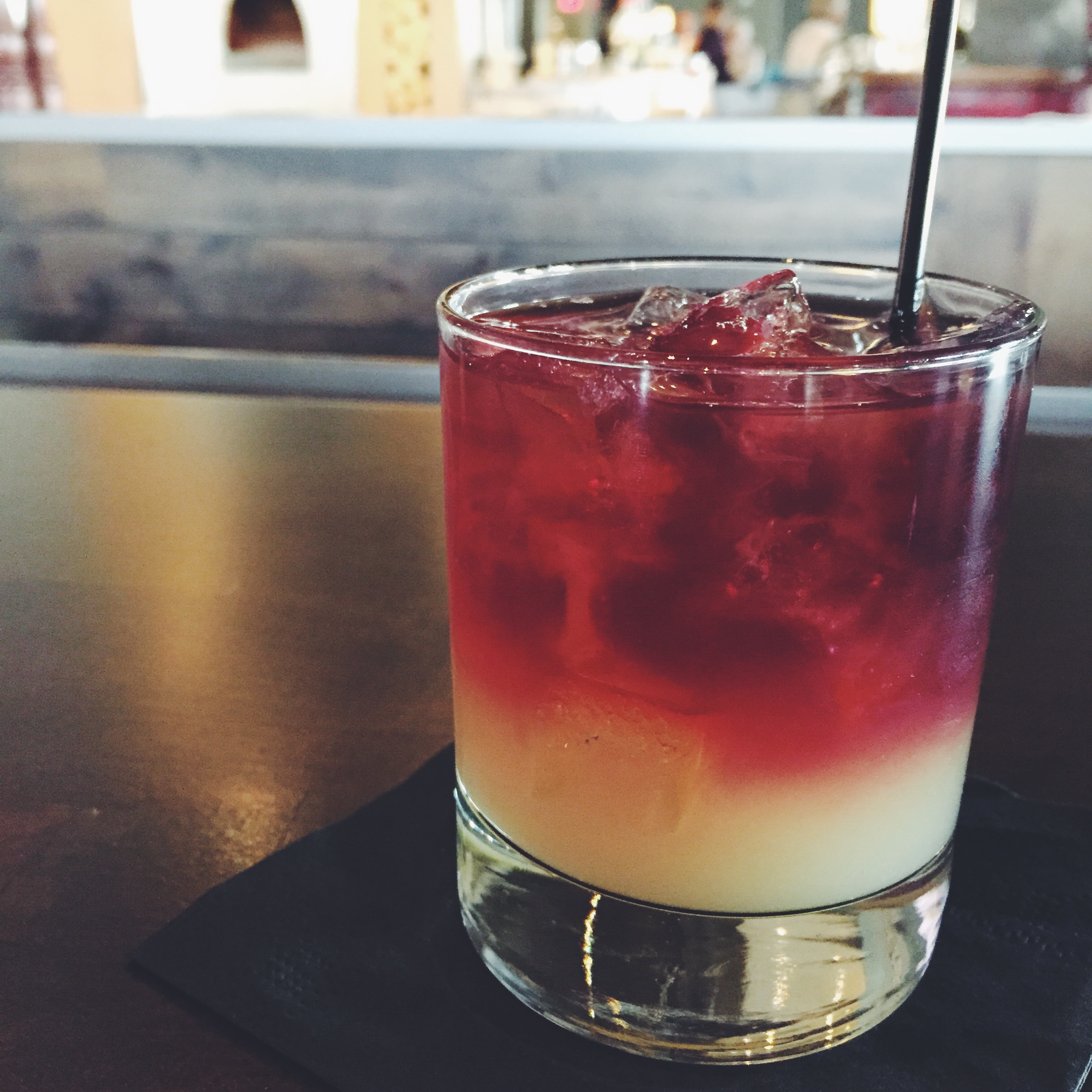 We watched a little bit of Netflix back at our hotel and tried to crash early, as sleep the night before the night before a race is extra important. We slept decent, and awoke early to the news of the newest royal baby. We proceeded to watch Good Morning America for an embarrassingly long time, then meandered down to the free breakfast and entertained ourselves with the waffle maker for awhile. There was no way we were drinking motel coffee, so off to Cultiva we went. Their new location near East Campus is bright and spacious, and we loved our cappuccinos as usual. We even bumped into a barista who used to work at our favorite Omaha coffee shop. 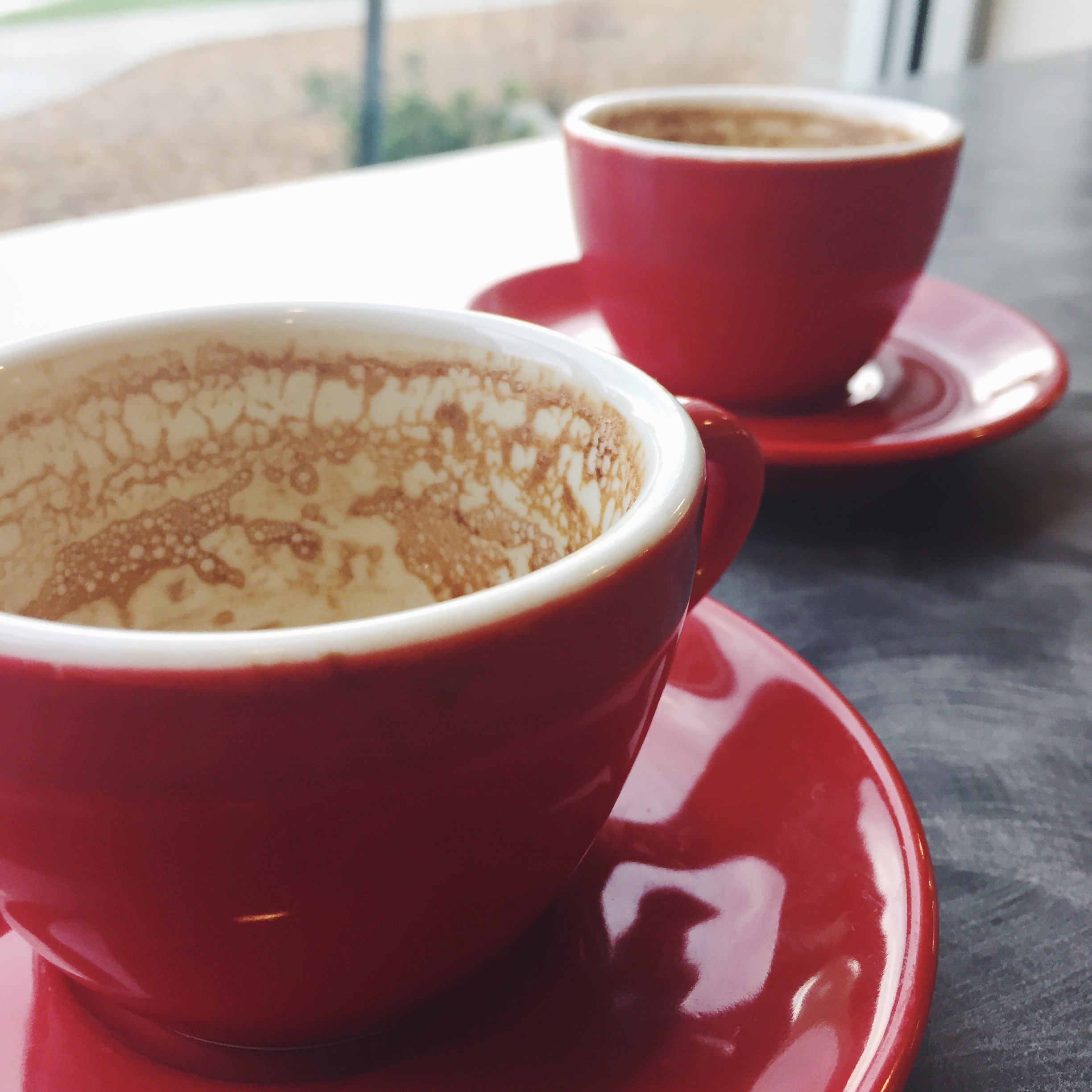 Next it was off to the expo and packet pickup. Lincoln is a fairly large race (for the area) – 12,500 – but they somehow make packet pickup super simple and painless. After getting our packets and examining all the goodies inside, it was picture time. 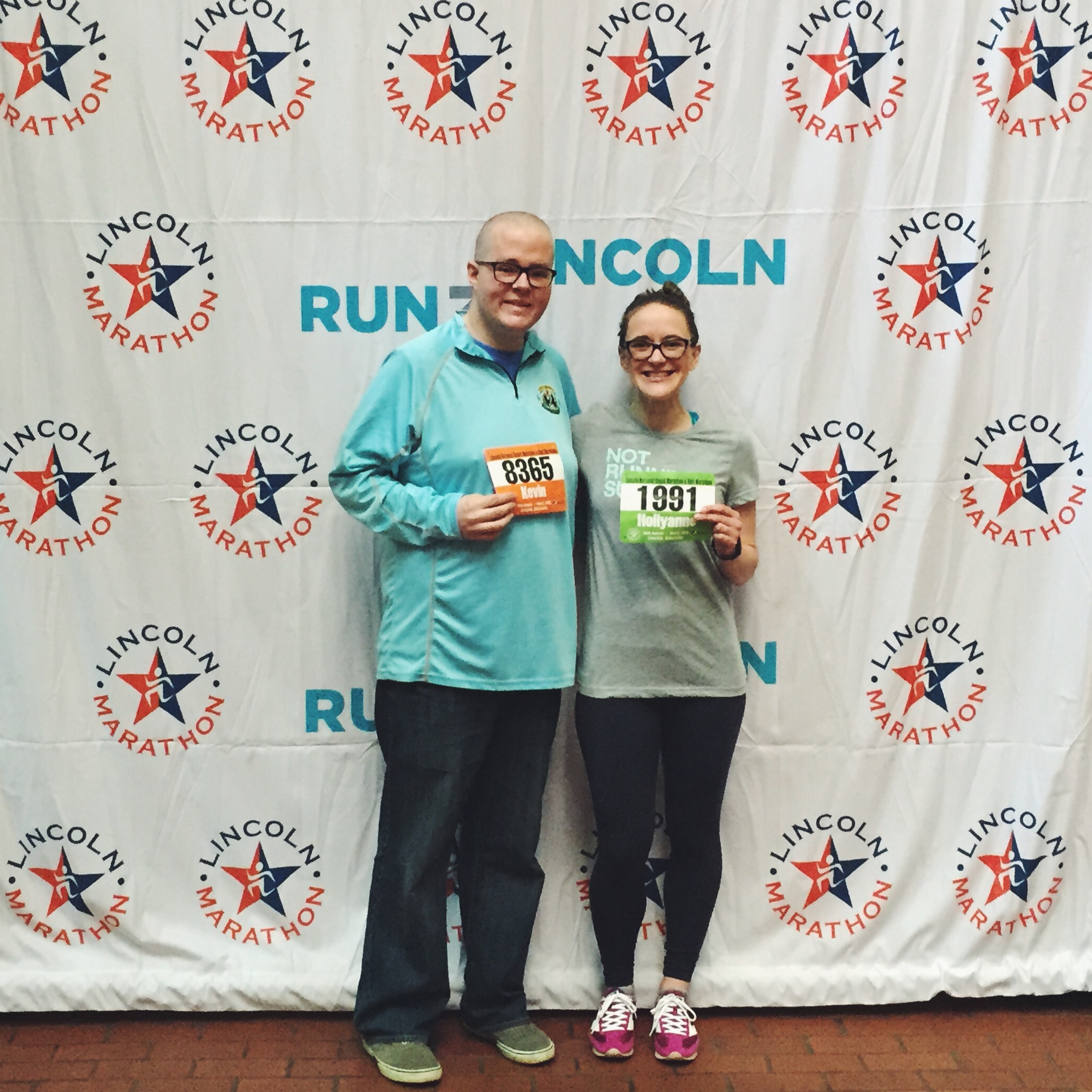 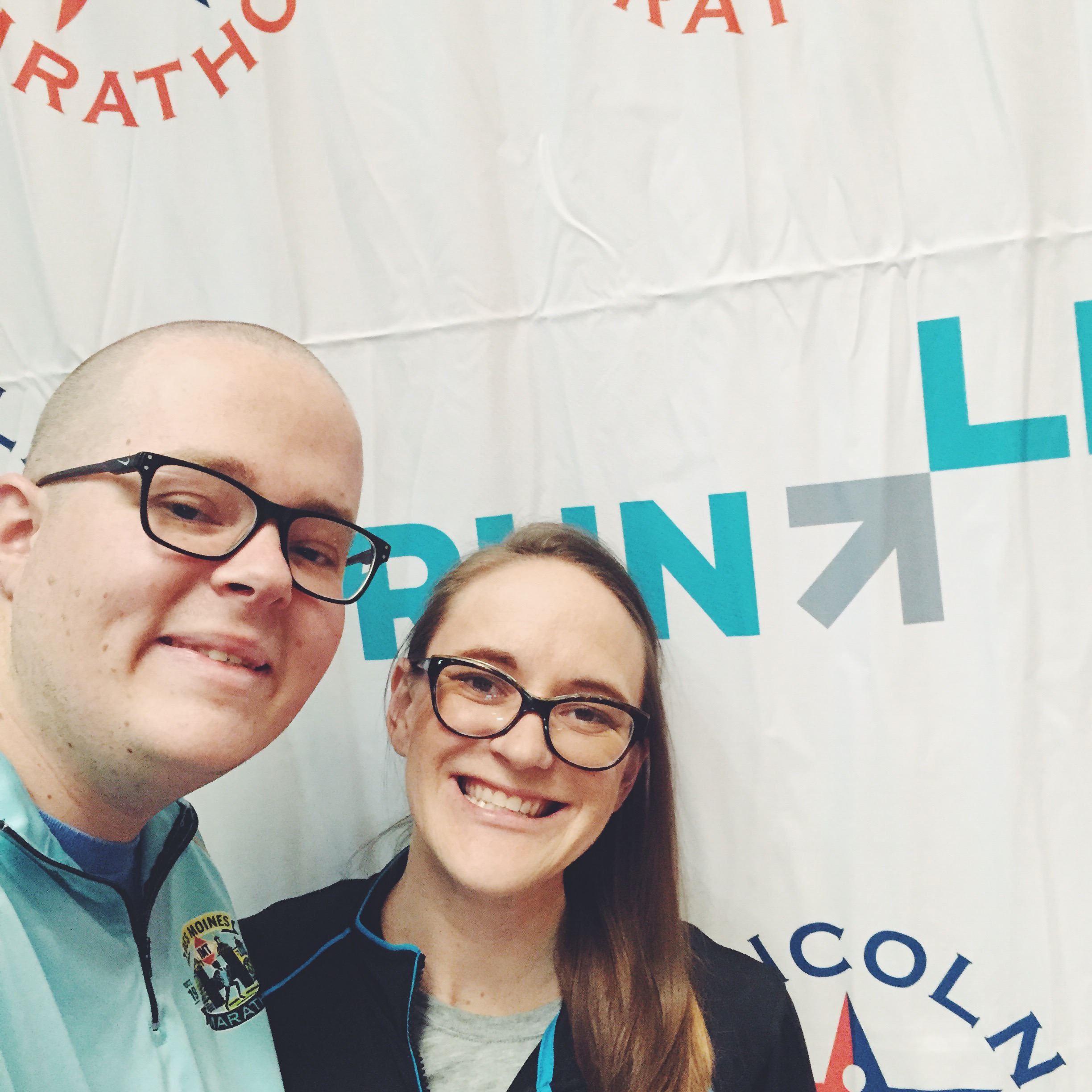 After a few too many selfies as usual, we headed up to the expo, where booth after booth proceeded to take all of my money. And by that I mean I gave them all my money in the form of gear purchases. The deals were too good; we couldn’t be helped! I even managed to score a Brooks winter running jacket I’d been eyeing for awhile for only $50! I won’t be able to wear it for another six months, but it’ll sure be handy come November. Among all of the other absolute necessities I bought were these runderpants (which I actually ended up wearing for the race and were very comfortable). I mean, come on! I had to. 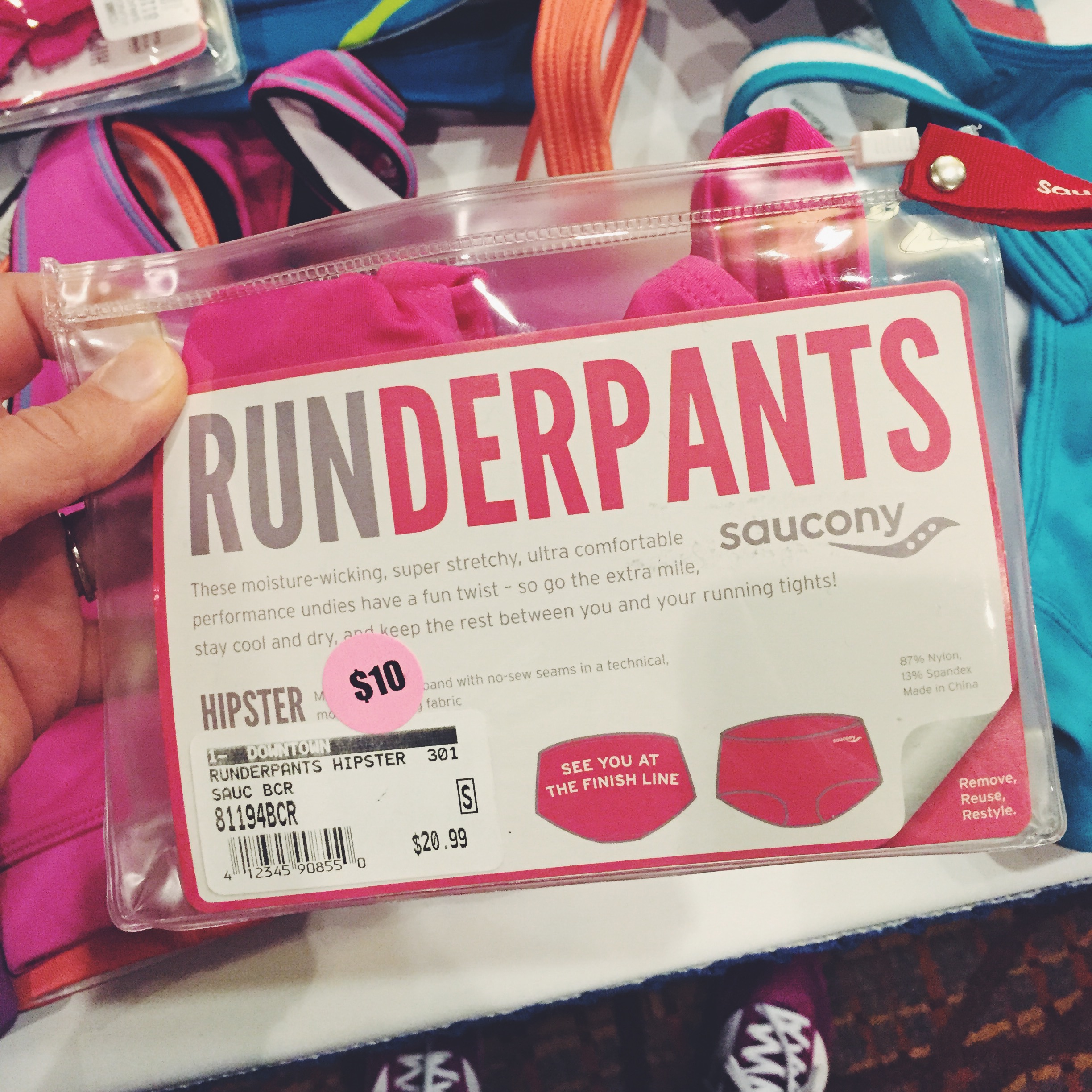 Post-expo we walked a few blocks down to the Haymarket and meandered around the farmer’s market, which is exciting if you’re a Nebraskan because this was its first weekend back since October. We had our fair share of samples, then met up with my sister for paninis at a really neat underground cafe, Crescent Moon Coffee. Our sandwiches were fantastic and the staff were very friendly; we’ll definitely be back here on a future trip, and if I was still in school this would totally be a place I’d study at (or pretend to study while drinking lattes). After lunch Hannah took Kevin and I on our inaugural trip to Ivanna Cone. Now that I’m writing this ivannanother one.

We walked around a bit more and then parted ways with Hannah so we could go relax at our hotel for awhile. Once back we completed several very important tasks, including spending a good hour overanalyzing what outfit to wear for race day. Since it was expected to be warm, we both decided on shorts, short sleeves (a tank for me), and hats. Then, in night-before-race tradition, we laid out Flat Hollyanne and Flat Kevin for their photo op. There’s my runderpants again! 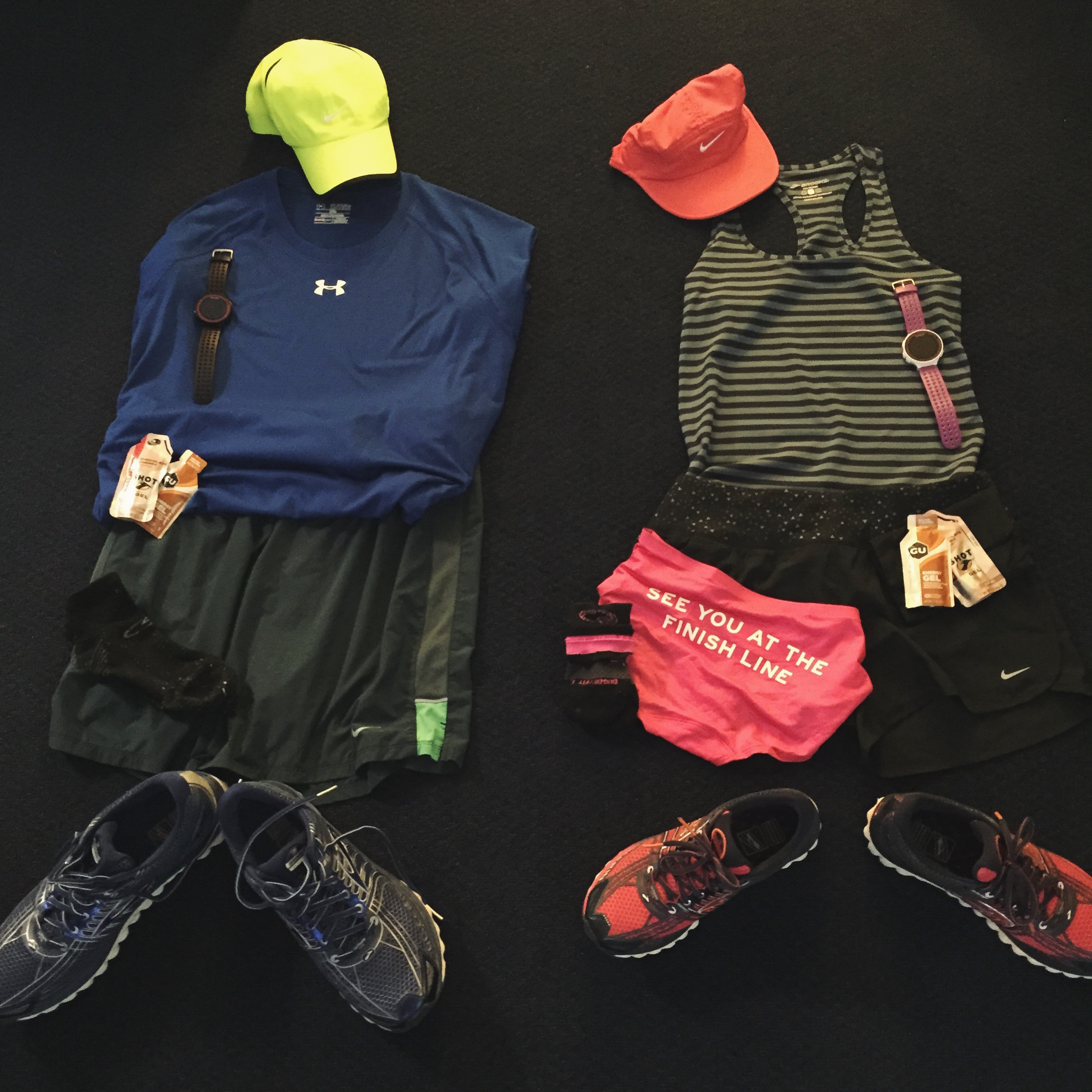 After a few hours of resting, we went back downtown for the pre-race pastathon. We met up with my coworker Teresa and her friend Sydney at the dinner and just hung out and hydrated for awhile. It probably goes against all good training advice, but it’s become somewhat common for us to have a beer the night before a race – both to calm the nerves and because we love checking out breweries in cities we’re running in. We’d been wanting to check out Blue Blood for awhile so there we went. We both had their wheat beer which was light and refreshing, and had a good (weird?) conversation with the bartender. 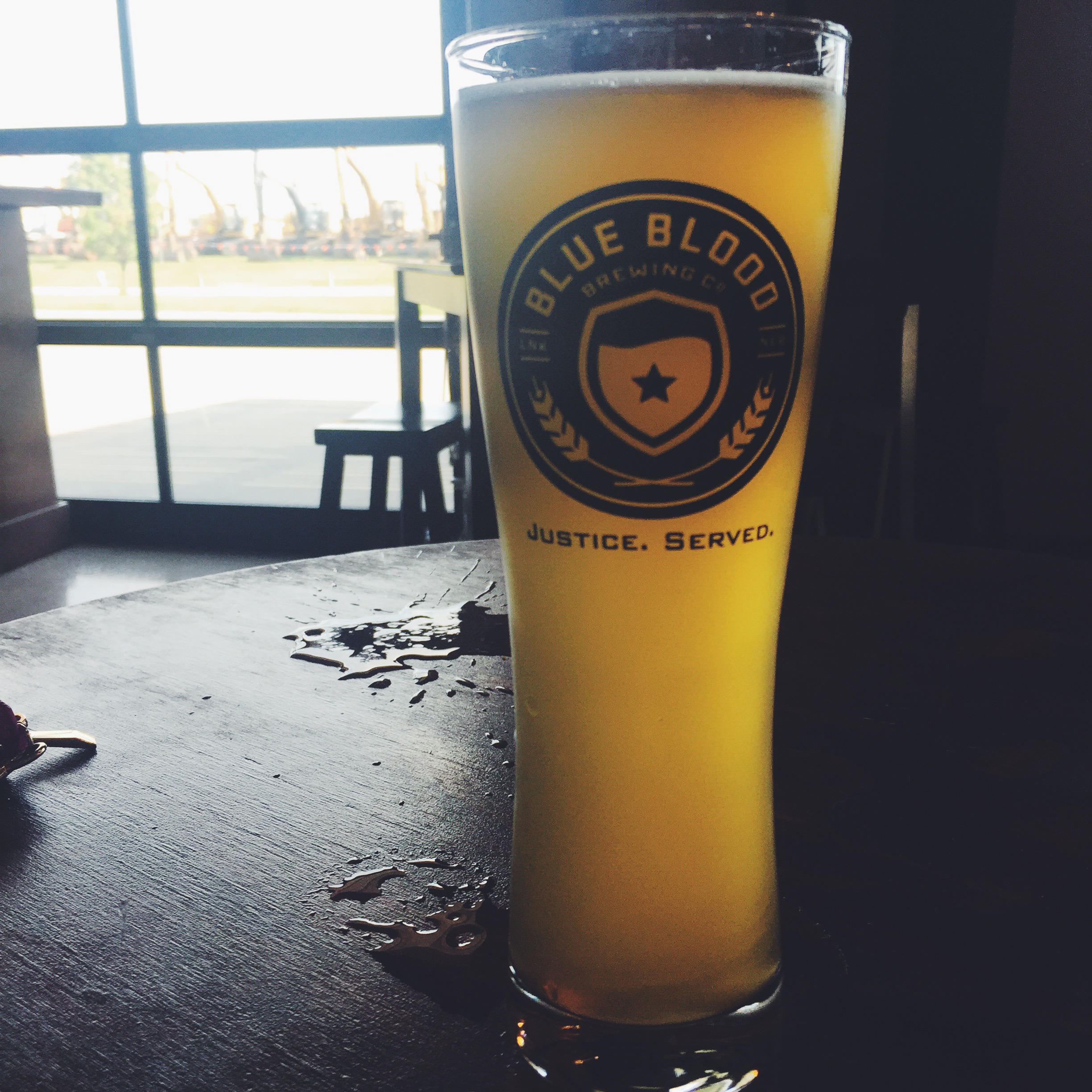 We were back to our hotel by 7:30 or so and read for awhile before our 9:00pm bed time. I never, ever, ever sleep well the night before a race (or really any special event), but I actually managed to fall asleep pretty fast and only wake up once before the 5:00am alarm. WOOT. At 5, we got up and got dressed, pinned on our bibs, ate a banana, and packed up the car and checked out of our hotel by 5:45 so we could be on campus where the race started by 6. 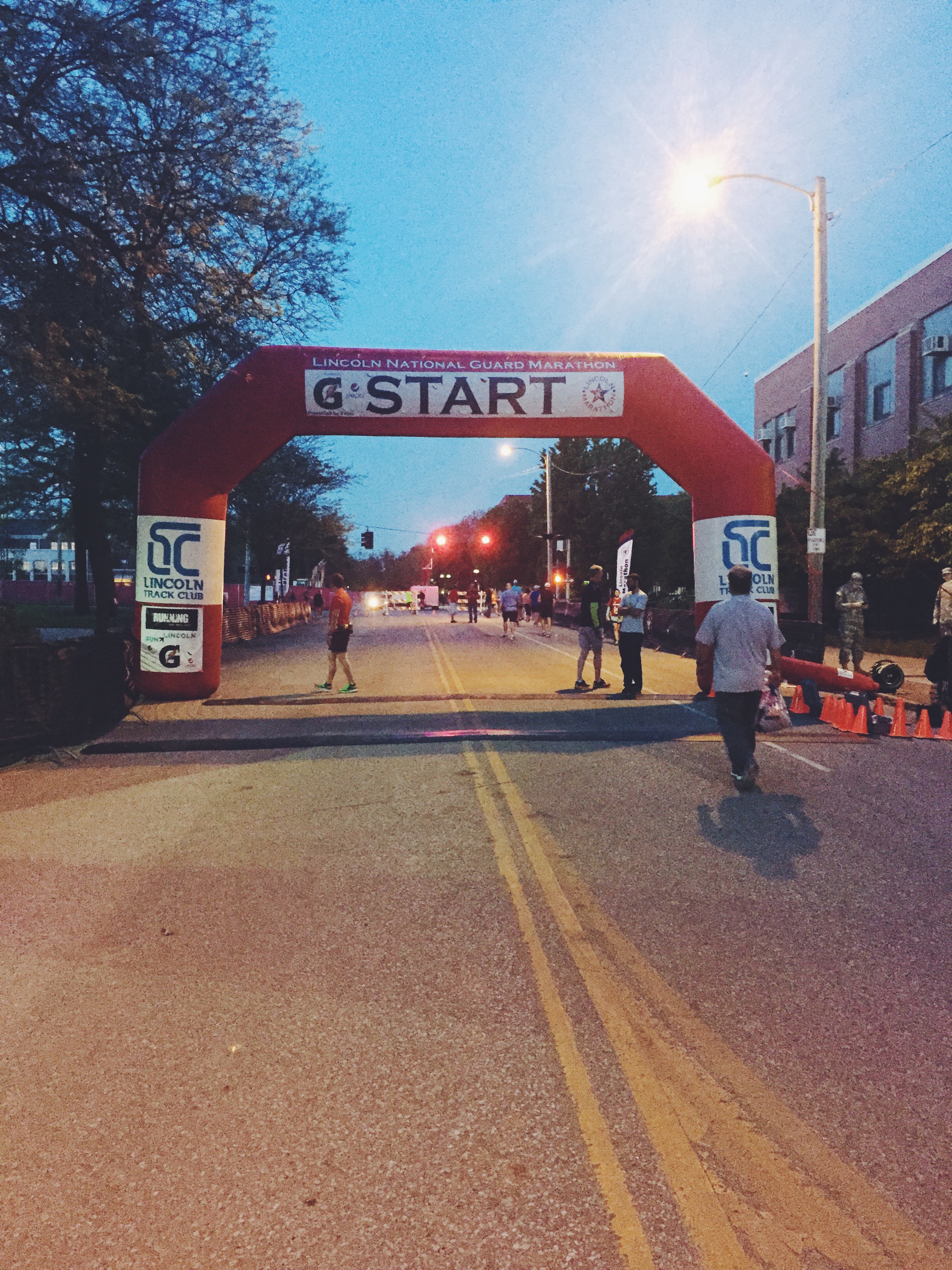 Once on campus, we did the bathroom things before the lines got too long, dropped off our gear-check bags, and ate a mini bagel with peanut butter. We usually just have a banana before long runs but on race day those extra carbs about an hour beforehand come in handy. We took a very tired-looking selfie and also met up for a photo with a couple of other Omaha runners. Shout out to Vanessa and Rachel! 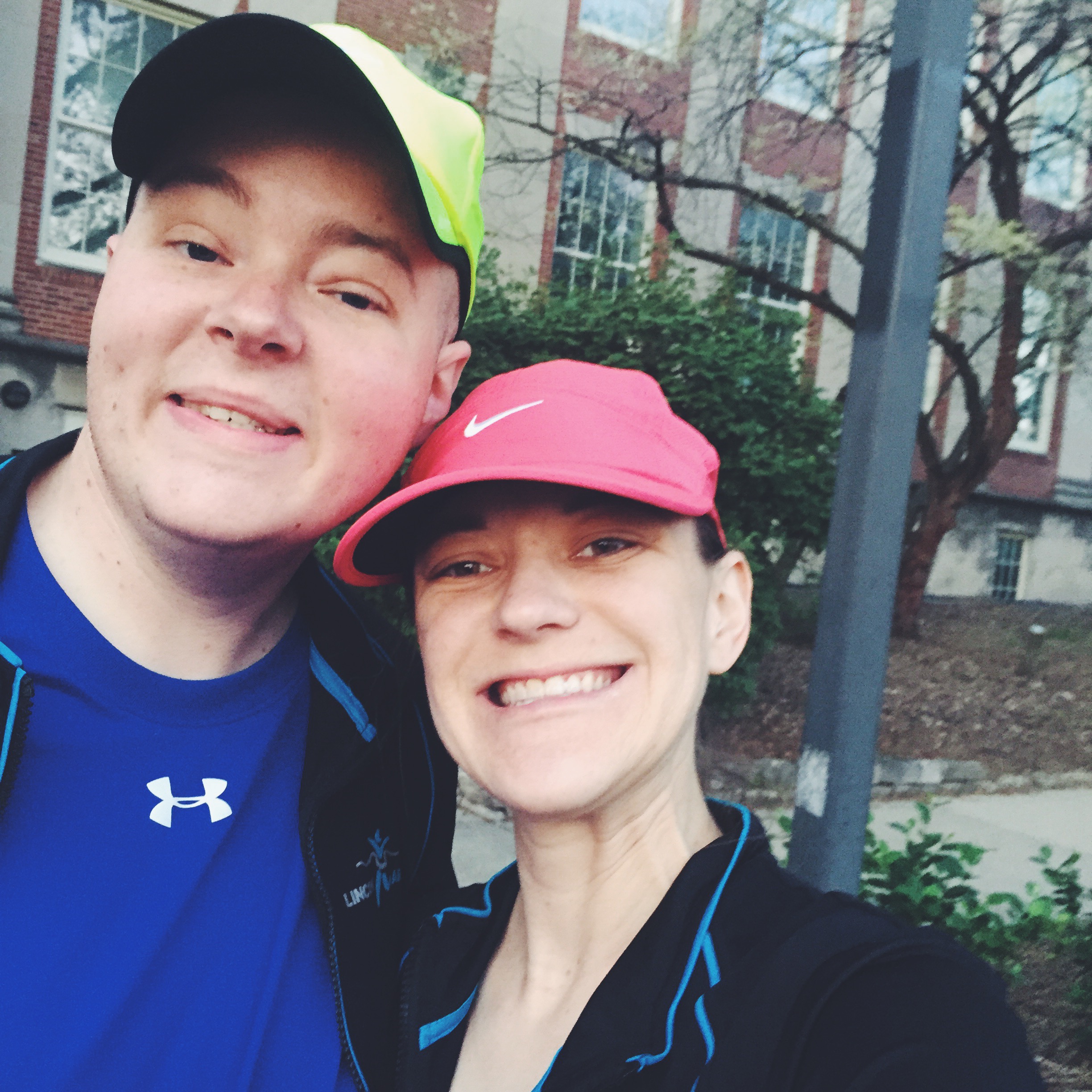 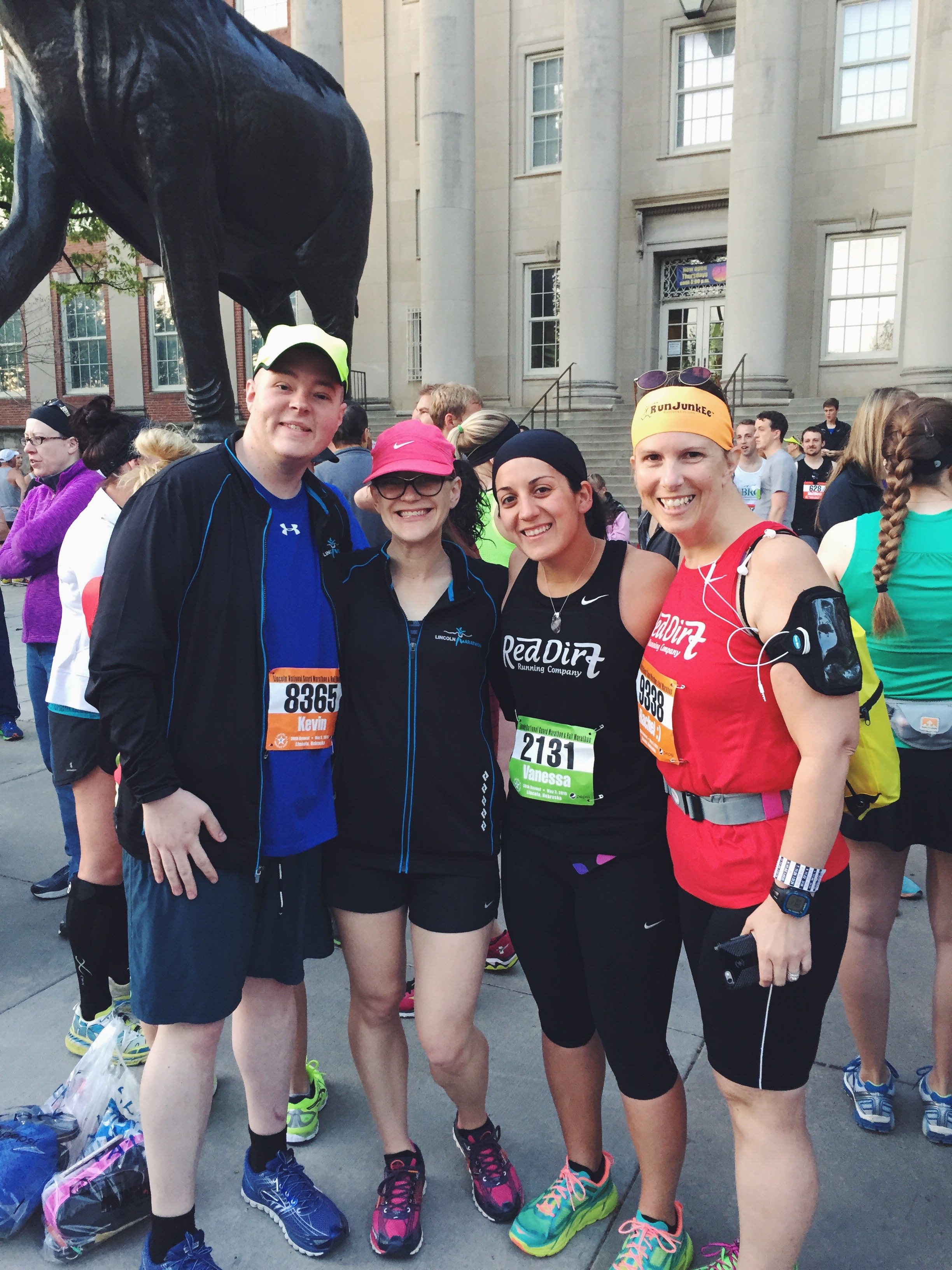 A couple of nervous pees and a few minutes later, it was time to line up! There was a new system this year where you lined up based on the color of your bib, which corresponded to your expected finish time. I was in the green section, about halfway back, and Kevin was orange, a few corrals back from me. We said our goodbyes and good lucks, parted ways, and got in our respective waves. Temperature at the start of the race was around 60, with approximately 1000% humidity.

Now for a brief race recap from each of us:

H: Going into the race I was hoping to PR and break 1:50, but also possibly come closer to 1:45 depending on how I felt. Right away I felt HOT and THIRSTY and like even 1:50 might be a struggle. The first half or so I felt solid but was stopping at every aid station for water, and drinking most of the 6-8 ounces each time. I’m not used to drinking anywhere near that much water during long runs, so while I knew it was important to stay hydrated on this unseasonably warm and humid day, all that water sloshing around caught up to me at about mile 8. I ended up taking several walking breaks – another thing I don’t normally do – over the last 4-5 miles, secretly hoping my paces would be so bad that I couldn’t possibly meet my goals and could maybe just jog really slow and/or walk and get this thing over with. With about 5k left I knew I had just enough time to break 1:50 and so I went for it – aka, I felt like I was sprinting the entire time but was really doing 9:00 minute miles. It got a little dicey at the end, but seeing my sister and her roommate at 12.5ish really helped me kick things up a notch and finish strong with a new PR and my first sub 1:50: 1:49.31. They were even so kind to take a few photos as I passed. 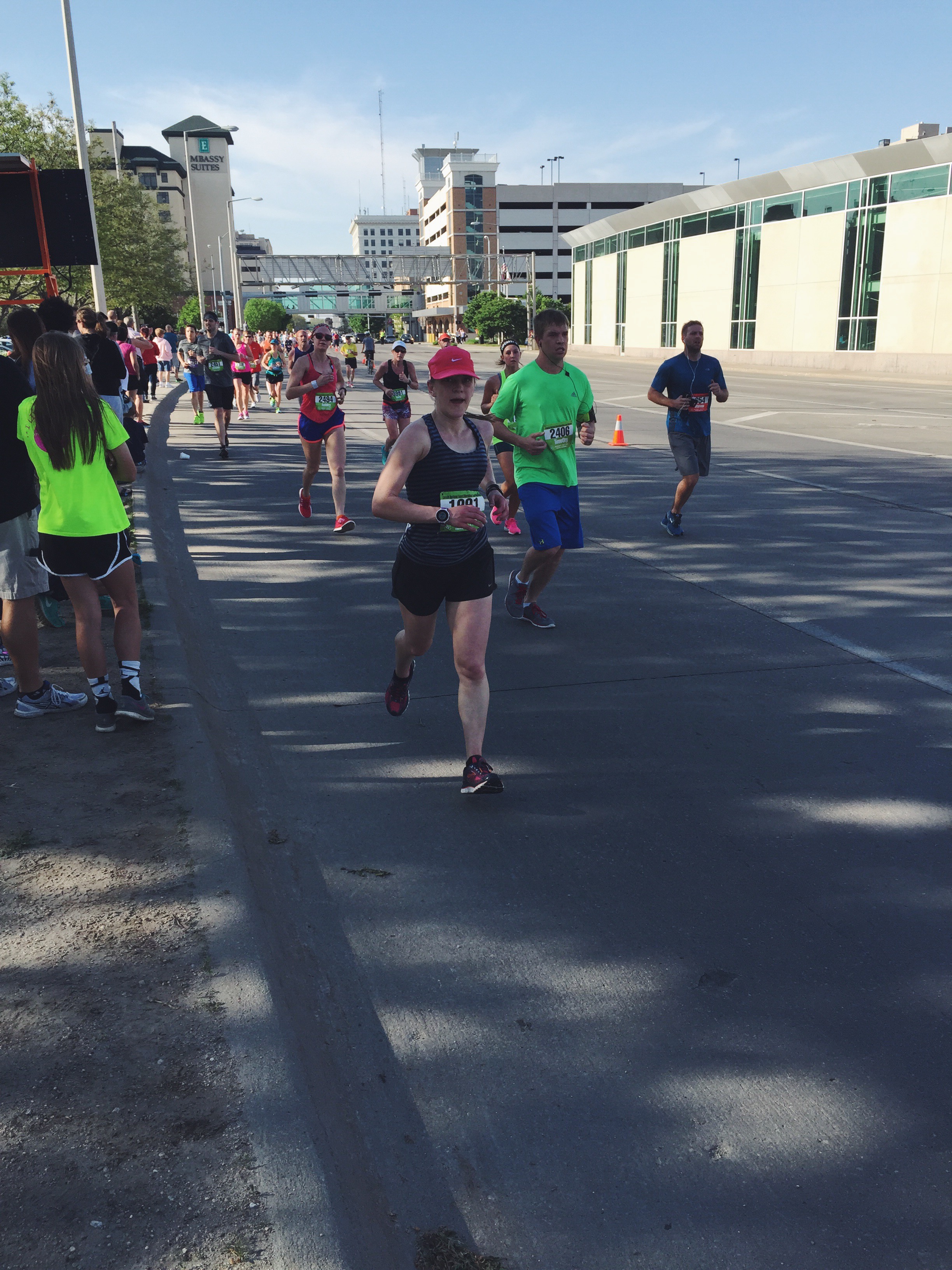 Hey, I don’t look so bad here. Probably because it’s kind of far away. Let’s get closer. 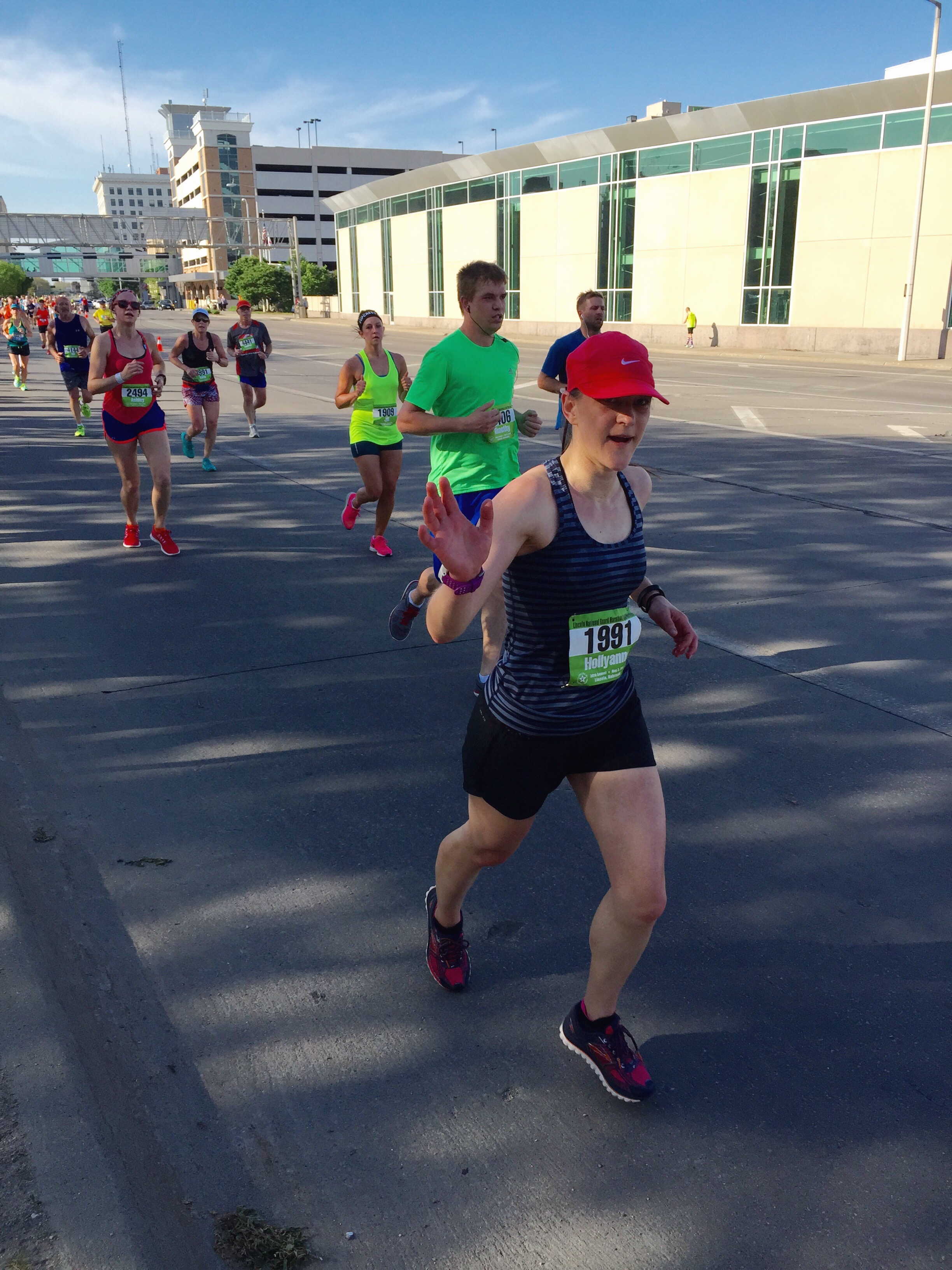 Ah, that’s more like it. I like to call this one, “Will somebody please high five me already?!” As you have just seen, I am not someone who produces good-looking race photos. I like to think it’s because I’m working real hard. People who take cute race photos, you’re my hero and I also hate you a lot.

K: Going into the race, I was hoping to break the 2:30 barrier (finally).  I knew that my training had been solid, and that given ideal race conditions, it would be more than possible to do.  With the starting temperature being what it was, though, I knew that I needed to make sure not to start off too quick, or I would fade away down the stretch.  I spent most of the first 5K navigating around slower runners/walkers, which, while annoying, helped me from not going too fast.  About mile 4 I started to realize that the weather was warming up, and my body wasn’t reacting well.  I still continued on, walking for one minute every half mile (this was the plan all along).  Right around mile 5, there was a guy spraying runners with his garden hose.  God bless that man, it felt outstanding.  I hit the 10K point about an hour and 9 minutes in, and began to realize that it was going to be VERY difficult to hit 2:30 with the heat.  My pace had already slowed down more than it should have, and I wasn’t going to be getting any faster.  When I got to the water station at mile 7, it was clear that my strategy was going to be about just finishing.  I fully stopped for ice and water at each of the last 3 aid stations, and took as many walk breaks the rest of the way to the finish.  I saw Holl, my sister-in-law, and my sister-in-law’s roommate at about 12 and a half, and I think the only words I could muster were “It’s really F*%#ing hot.”  Anyhow, I made it to the finish in 2:39.29.  Not my fastest time, and not my slowest time, but on a day like that, I’ll definitely take it!

Kevin takes way better race photos than I do. WHY ARE YOU SO HAPPY? Knock it off.

All things considered, a pretty great weekend. I’m so proud of both of us for our strong training during this cycle, getting out there and getting it done, and most of all – finishing. There were several medical transports and hospitalizations due to the heat, etc., so as always, having a healthy body that can finish a race is something we’re so grateful for. I’ve enjoyed all of the half marathons we’ve done, but so far, Lincoln is my most favorite – not just because I’ve set PRs here two years in a row (though that helps), but mostly because of the outpouring of amazing volunteers who help make the race possible and the support offered by spectators (many of whom don’t know anyone racing, and are just out there!) along the entirety of the course. To the people who handed out kleenex/orange slices/gummy bears/vaseline, God bless you. 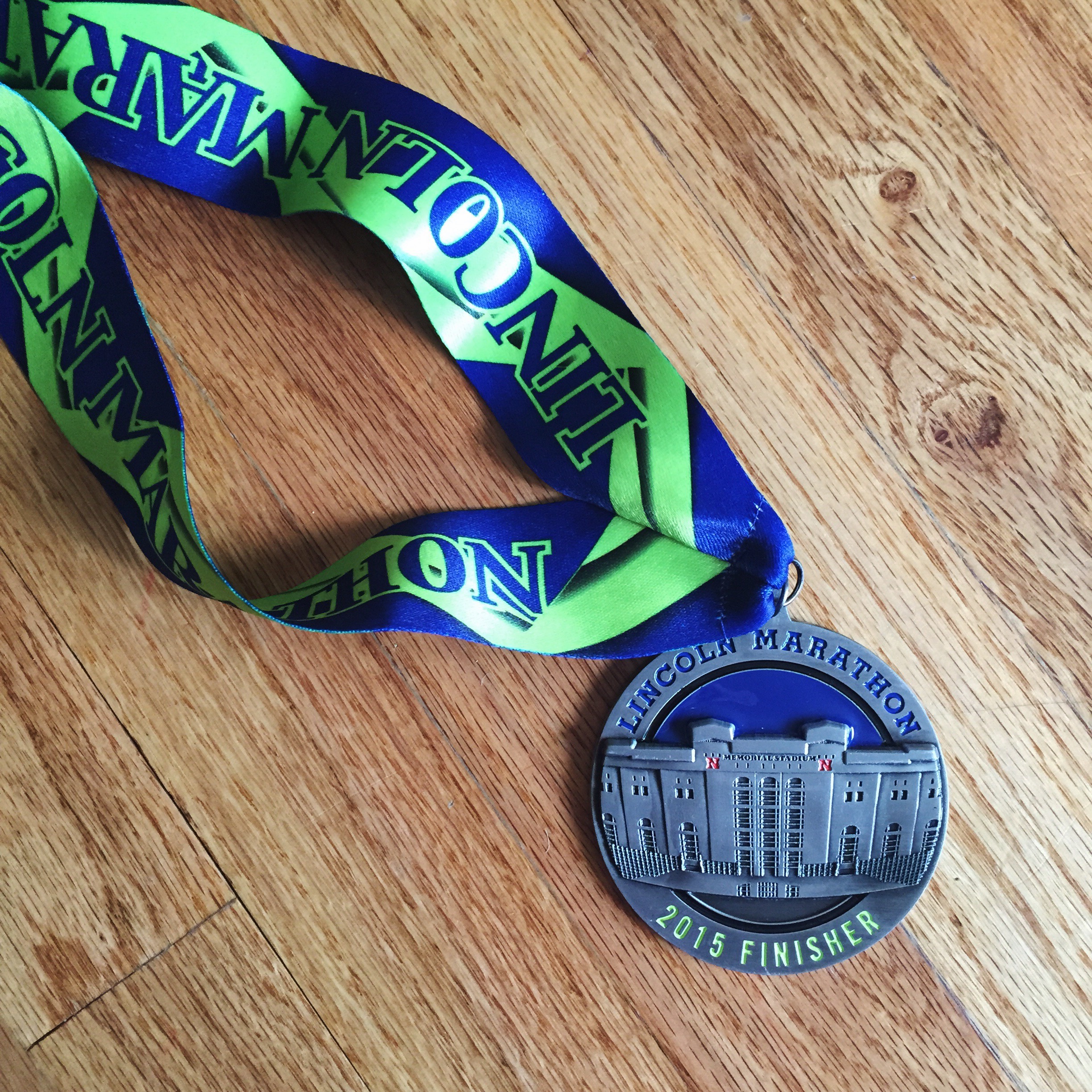 We take recovery pretty seriously around here, so once we were back home that meant breakfast burritos from a south Omaha taco shop, ice cold margaritas, and compression socks. 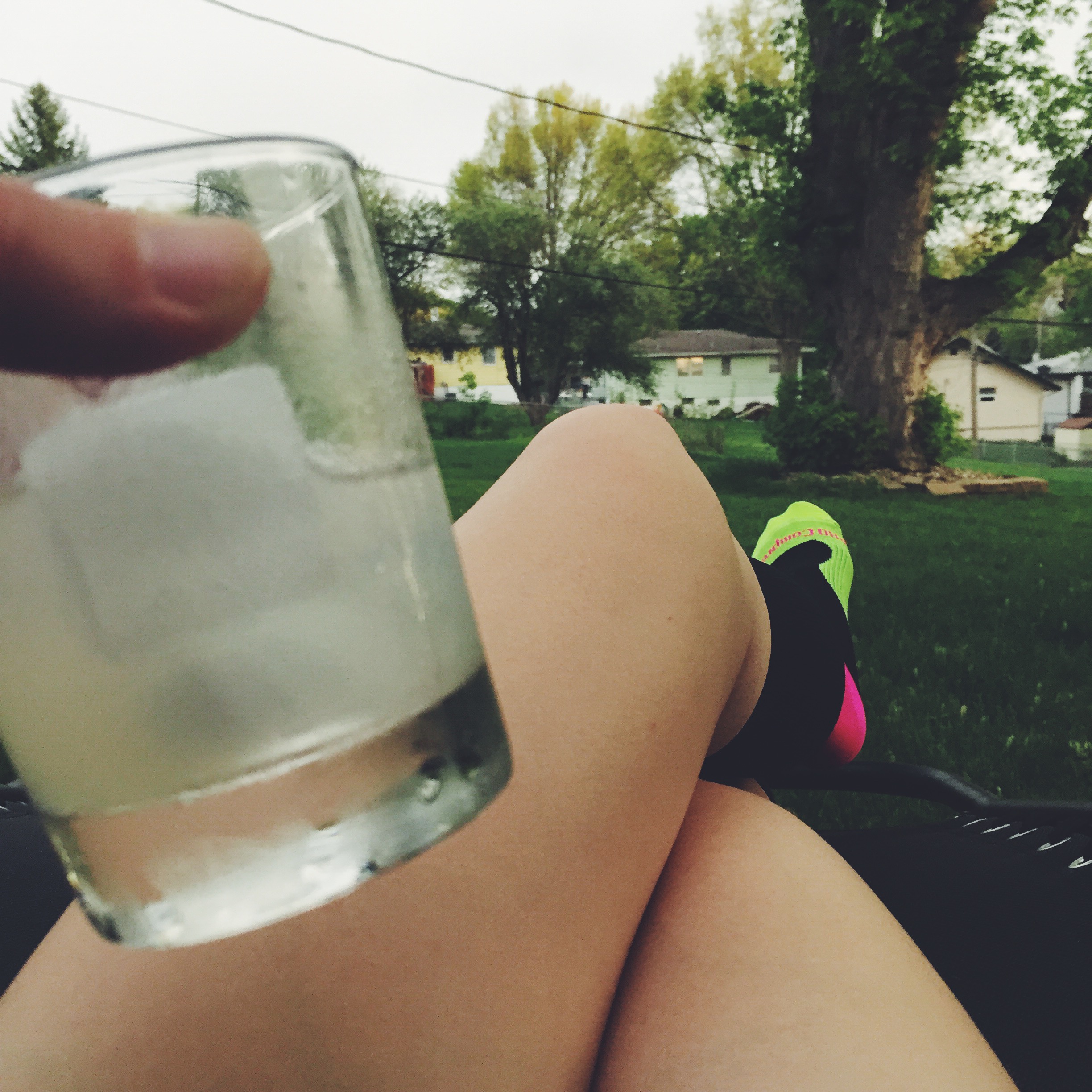 What’s next? Stay tuned; we’re both signed up for our first full marathons this fall and we’ll be talking running around here way more often.

by Hollyanne Posted on May 6, 2015
Posted in adventures. | Tagged lincoln, race recaps, running | Leave a comment