if you’re new here, I’m currently training for my second full marathon – Chicago – on October 9, 2016. I am currently in week 13 of 16, and you can read about weeks 1-4 here, weeks 5-8 here, about last year’s race here, and all things running related here.

after feeling a little blah after week 8 I was pretty determined to nail week 9, particularly because I knew it was an important build-up week and included my first 20-miler of the cycle. this week also marked the first track/speed workout of the cycle, which was 4 x 1600 mand 3 x 200m (with warm up, recoveries, and cool down). I was nervous going into it – I’ve only done mile repeats one other time – but it went well; in fact, I probably went a little too fast. I guess I was excited to get back to the track — or just to have a week off from hills.

I of course had some nerves going into the 20-miler, but nothing like last year — because now I know that I can do it. I had a route planned that I was excited about – I think that’s key – and it was a cool day, and I got started early (like 5:30 or so). I started off slow and then, as the workout called for, did miles 8-12 at marathon pace, which felt surprisingly comfortable. I slowed down after mile 12, but not by much, and was even able to comfortably squeeze in a couple of fast finish miles at the end. I’ve got some tough goals for the marathon, but this run (and week overall) made me feel like they were truly attainable for the first time. #nailedit

this shit was hard, no doubt, but there is nothing better than the high of finishing a run like this, especially when it’s been almost a year since I’ve done it. we went to kansas city for the weekend immediately after finishing our run, and it was one of the best weekends i’ve had in a long time, probably in part because I was so hyped on the long run.

I got in two good strength workouts this week, but no core workout on saturday, and no cross-training, although we had a very active weekend overall.

after 20 miles on saturday, and a very full weekend with basically no rest in kansas city, I woke up on monday feeling wiped. I was experiencing a bit of what I think was extensor tendonitis on my right foot, but I decided to get up and see how it felt while running. I made it about half a mile, and although the pain was definitely manageable, I realized it wasn’t worth hurting it more and decided to turn my 6 mile run into a 3 mile walk. mondays are an easy run day anyways, and this was the first run in a long time that I’d skipped, so I didn’t worry too much over it.

the rest of the week went fine, but not great. it was one of those weeks where I felt like I was going through the motions rather than really processing everything or enjoying the training (which I usually do). hill repeats felt more challenging than usual. an 8-mile run with 5 miles @ tempo pace was pretty miserable, probably because I decided to do it in the evening and it was warm.

long run this week was 14 miles easy, but it felt so hard. it usually takes a few miles for me to get comfortable on a long run, and from there it’s usually smooth sailing, but that never happened on this run. can’t exactly pinpoint why, but likely just cumulative marathon training fatigue. I got it done and tried not to read into it much. I got in two strength workouts plus a good bike ride on sunday this week, and thanks to a little extra rest this week, my foot seemed to mostly heal up on its own.

I had been simultaneously nervous and excited for week 11 ever since I first looked at Sarah’s training plan for us back in May. the track workout this week was yasso 800s – basically, ten 800m repeats run at goal marathon time, in minutes, with equal recovery times. (for example, if your goal is a 4:00-hour marathon, you’d aim to run each repeat in 4 minutes, then recover for 4 minutes (slow jog/walk), 10 times through). my goal was to do each of these at around 3:20-3:30, and I ended up averaging right in between there. it was a tough workout that ended up being over 10 miles, but felt very manageable and was definitely a confidence booster.

this week’s long run was 22 miles – the longest run for this cycle – with miles 12-16 at marathon pace. i tried to treat this as race practice as much as possible. usually I try to get out the door asap but this week I ate breakfast right after getting up, then waited a while to allow some time for digestion, but still got a fairly early start. I had my camelbak with me and practiced drinking water every 2 miles, and took 2 chews every 6 miles, which worked well. I did feel hungry toward the end, so I know that I need to eat a bit more for breakfast on race day. once I hit my marathon pace miles (that I did a bit too fast), I was in the zone, and although I slowed a bit after mile 16, I still hovered right around marathon pace for the remainder of my miles, and ended up finishing with an average pace of 8:01 – right at my race pace. I wasn’t even watching my watch much, the pace just felt comfortable, which is a great sign!

I switched things up this week for strength and did two of kevin’s workouts – one was a burpee/deadlift ladder workout, and the other was a circuit of burpees, pushups, mountain climbers, jump squats, and planks. both were very challenging but rewarding. I got through 1 round of a core workout after my long run but didn’t have energy for the second round. no cross-training this week. 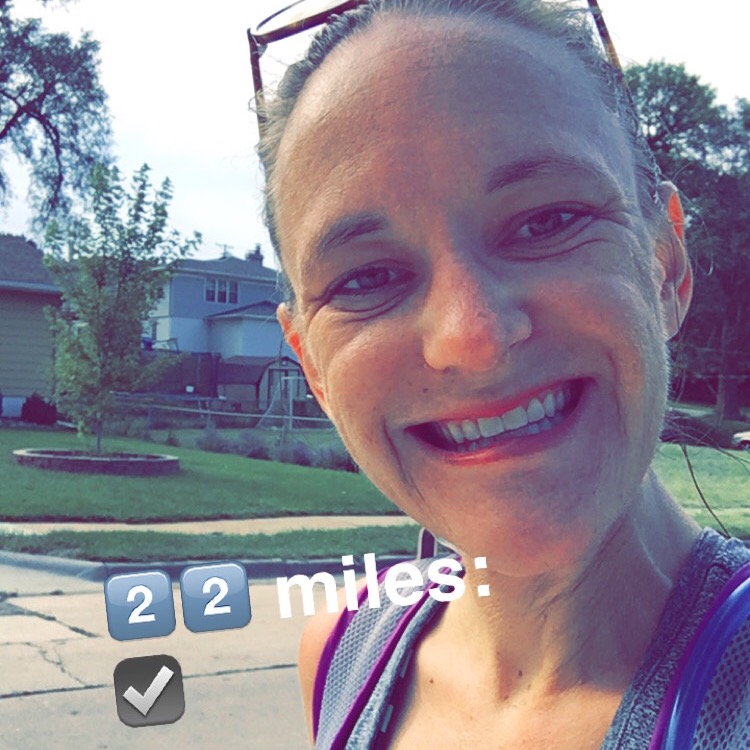 much like week 10 after my 20-miler, this week left me feeling kind of tired. I slogged through monday’s easy run, and almost gave up on tuesday’s run (5 x 1600m repeats), but decided to push through it and I ended up feeling much better once I got started, and I hit all my splits just fine. I didn’t learn my lesson from a couple weeks ago and decided to do thursday’s tempo run at night which again, was fairly miserable. it wasn’t ungodly hot but it wasn’t exactly comfortable either, and I just felt like I could not get my legs to turn over. I made it through and was happy to have it done, but felt like crap afterwards. running at night always makes me feel strange and I have no appetite, but I know I need to eat, but I always wait too long and then feel worse. every time this happens I remind myself that I need to just get it done in the morning, especially if it’s a workout day.

this week’s long run was back down to 14 miles. I totally get the concept of drop-down weeks and I think they’re essential for staying healthy and avoiding burnout, but once you’re up to 20 or 22 miles, running 14 can just be hard to get excited about. so on friday night, we decided that on saturday morning, we would sign up for and run the peak 2 peak 10-mile race (after doing a few warm-up miles to get to our 14). thankfully there were still spots available – it was so fun to be in a race environment and of course, not have to worry about wearing our camelbaks and all that. I did end up racing the race — it was too hard not to! ended up 4th female overall and 1st in my age group, not too shabby for my first 10-mile race and for signing up on a whim! the post-race food was great, and we got a shirt, gym bag, and medal, all for $40!

I skipped a strength session this week but still got in a barre workout on thursday, and we did a leisurely (but hilly!) group bike ride on sunday for some cross-training.

as I write this, there’s only about 3.5 weeks until race day — I can’t believe how fast this training cycle has gone by. right now, I’m feeling confident and excited, but still really nervous. I know that [most of] the hard work is done, but I’m also anxious about the taper period and of course, executing on race day. for now, all I can do is get in these last few weeks of training, stay rested and healthy, and trust my training!

by Hollyanne Posted on September 13, 2016
This entry was posted in adventures. and tagged chicago, marathon training, running. Bookmark the permalink.