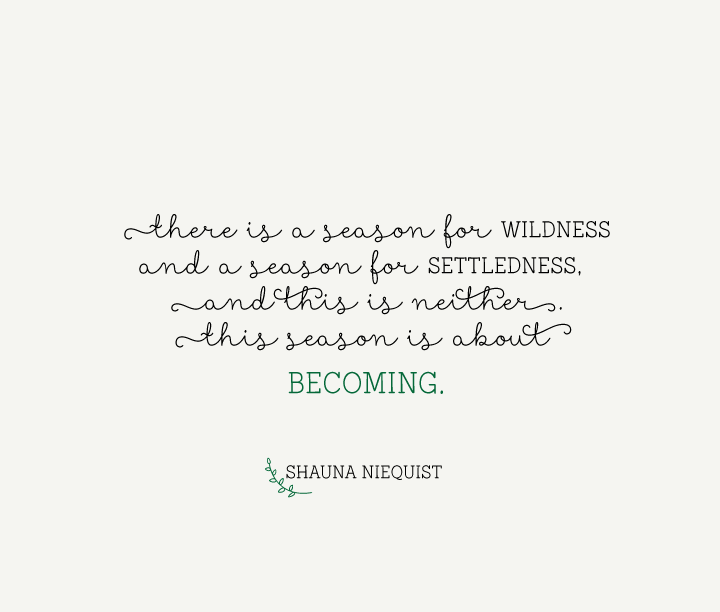 if 2013 was a year of wildness (starting new jobs, buying a house, moving), and 2014 was a year of settledness (building stability in our work and home lives), then 2015 was most definitely a year of becoming.

2015 was a year of growth. growing into some beautiful new friendships and out of some others. the year where I finally embraced the value of quality over quantity in relationships, and the year where I experienced the freedom, but also heartbreak, that reality can sometimes bring. it was a year that required me to be a real grown-up in new ways – really hard ways – but ways that taught me a lot about myself.

2015 was the year of the marathon. in a time where running a marathon has seemingly become the new 5k, it’s sometimes hard to talk about running our first marathon as if it’s any kind of big deal. but the truth is, it’s a huge deal. more than anything else in 2015, training for and running my first marathon defined this year of my life. the marathon experience challenged me in every way – physically, mentally – and in the process, helped me fall in love with running all over again, and reaffirm my affinity for distance running. it’s an accomplishment I’m so proud of, and will remember always…and I can’t wait to do it all over again.

2015 was the year of the second car. (okay, in reality, it was only a few days of 2015…). if you’ve known us for a long time, then you probably know that with the exception of my senior year in college when we lived apart, kevin and i have shared a single car for the entirety of our relationship. what started as two broke grad students not being able to afford a second car eventually turned into just normal life, and save for a few #transitproblems here and there, we’ve learned to make it work, and figured we’d tackle the second car situation if/when it ever became a real issue. my time riding the bus (and occasionally bumming rides from friends) was incredibly humbling, and i’m thankful to have had that experience. due to a weird series of events over the past few months, coupled with the generosity of my parents, my family’s honda civic is now here in nebraska to stay. having a car (especially here in omaha) is such a ubiquitous thing, that it can be easy to take for granted, but the value of having another car isn’t lost on us one bit, and we’re grateful beyond words.

2015 was the year of the bar. last spring Kevin and I started meeting up at scriptown, a new brewery in the blackstone district. it was a short walk from my bus stop and the perfect place to grab a drink before heading home together. and somewhere in between the after-work beers and the weekend growler fills and bringing all of our friends in to try it out, too, it soon became our favorite place – our second home, a place where (nearly) everyone knows our name. this year, scriptown has been a place for us to celebrate good days and birthdays and anniversaries, and a place to wind down on the not-so-good days, too. we’ve always wanted a place like this – a place where we can be regulars at, and have real relationships with the bartenders and owners, and I’m happy to report we’ve definitely found it.

2015 was the year of the royals. alright, this one was probably more exciting and year-defining for Kevin than it was for me, but I have to admit, I had my fair share of fun cheering on this team to their first World Series since 1985. in 2015, I watched and listened to more baseball than I ever have in my entire life, and – yes, it shocks me, too – I didn’t even hate it. okay, so maybe having a giant crush on Eric Hosmer made the experience slightly more enjoyable :)

2015, like every year, was full of moments that I don’t want to forget. new half marathon, 10k, and 5k PRs for both Kevin and myself. seeing our amazing niece turn two. trips to California, Arizona, and Chicago, and the opportunity to visit with so many old friends. the four months we got to spend with my sister, while she lived with us here in Omaha this semester. and all the other everyday moments in between that make our life what it is right now – messy, beautiful, real. this year and every year, we have so much to be thankful for.

by Hollyanne Posted on December 31, 2015
This entry was posted in adventures. and tagged 2015, new year, reflections. Bookmark the permalink.