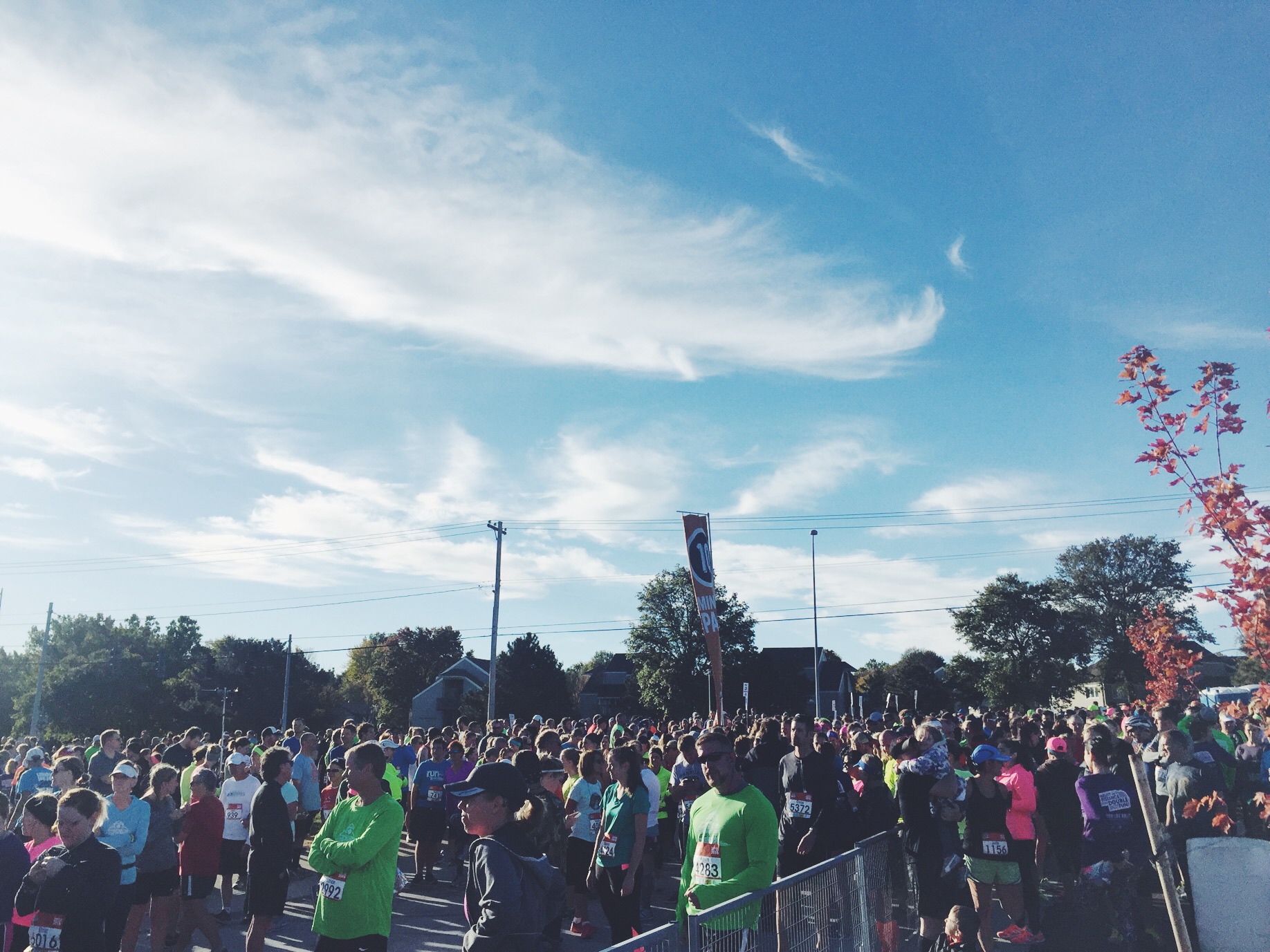 This past weekend we both ran half marathon #9: the Good Life Halfsy in Lincoln, NE. This was the second year for the Halfsy and after hearing from others how fun this race was last year, we decided to sign up waaaay back in March. Although we were really looking forward to this race and a weekend in Lincoln, it became kind of easy to forget about since we were so focused on marathon training throughout the summer and fall. So, it sort of snuck up on us and going into it we hadn’t done much running since our marathons two (Kevin) and three (Hollyanne) weeks ago.

Even though we only live about an hour from Lincoln, we decided to make a weekend out of it and head down early on Saturday morning and stay the night at the race hotel, the Holiday Inn Downtown. We arrived at the hotel right at noon, just as the expo (also in the hotel) was kicking off. We were able to check in early (always nice!) and head back downstairs to the expo. Packet pickup was simple and quick. They had an area for you to look up your bib number with sticky notes for you to write it down and give to the volunteers, who then gave you your race bag (which included a free Bulu Box)! There were a few other vendors set up, but overall a fairly small expo. In a second, attached room was a large booth selling official race gear. We went back to this booth a couple times throughout the day (and after the race on Sunday) because we couldn’t decide what we wanted. We both ended up getting a fun t-shirt and a hoodie (so comfy). We also grabbed a 13.1 Nebraska sticker for our car. They also had pint glasses for $10 that came with a drink ticket for the hotel bar or post-race party, so of course we couldn’t pass those up.

After stopping by the race gear booth we proceeded to a downstairs area to pick up our t-shirts – a long, sleeve tech shirt (purple for women, neon green for men) with thumb holes! Three cheers for a race shirt that I might actually wear!

There was a fun photo opp area so of course we stopped for a few selfies. 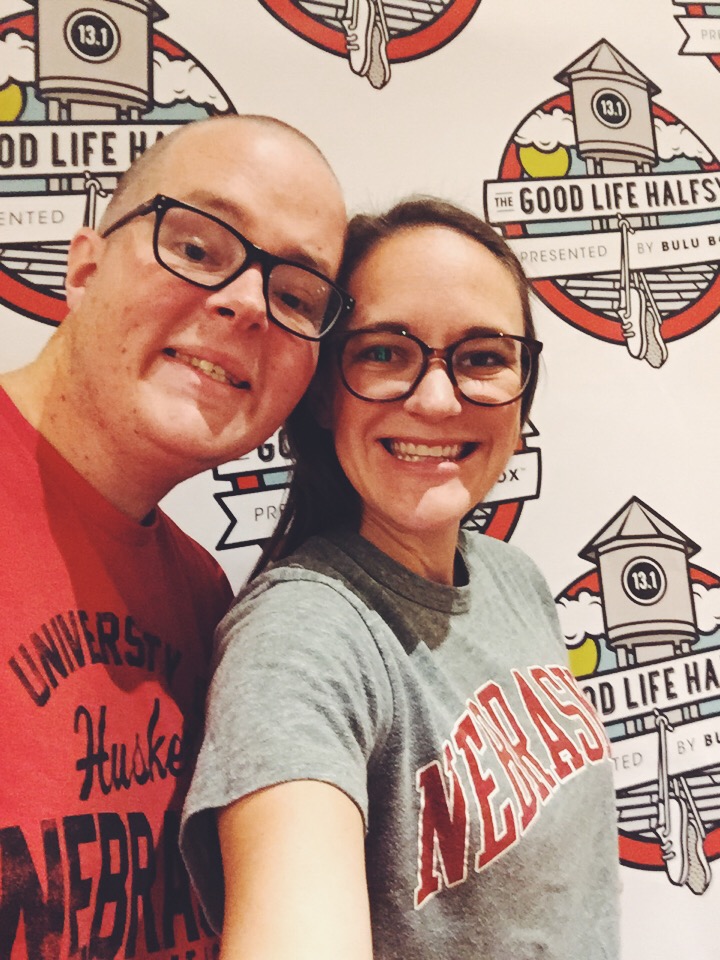 Once we finished up at the expo, we had an uneventful lunch while we watched the Huskers lose again. We then decided to stop by one of the local running stores in town, Lincoln Running Company; our race packet came with a Good Life Halfsy bracelet that got us discounts around town at local restaurants and shops, one of which was 20% a single item at LRC. We were in the market for some trail shoes so we thought we’d see if we could find some here. LRC had about 5 different trail shoe models for each of us to try on, and we both ended up with a new pair – I got the Mizuno Wave Hayate 2, and Kevin ended up with Nike Air Zoom Terra Kiger 3 – we’re all set for our trail races coming up this weekend!

We dropped our new shoes off at the hotel, and then walked a few blocks to a nearby Lincoln brewery that we hadn’t been to yet, Ploughshare Brewing Co. The place didn’t look like much from the outside but inside is a huge taproom with lots of fun different seating options, including a staircase to some upper-level seating! Having never been here before, we both decided to do a flight to taste several of their beers. We each got four different beers, and actually liked all eight that we tried, but especially liked the Oktoberfest and the Dandelion Saison! 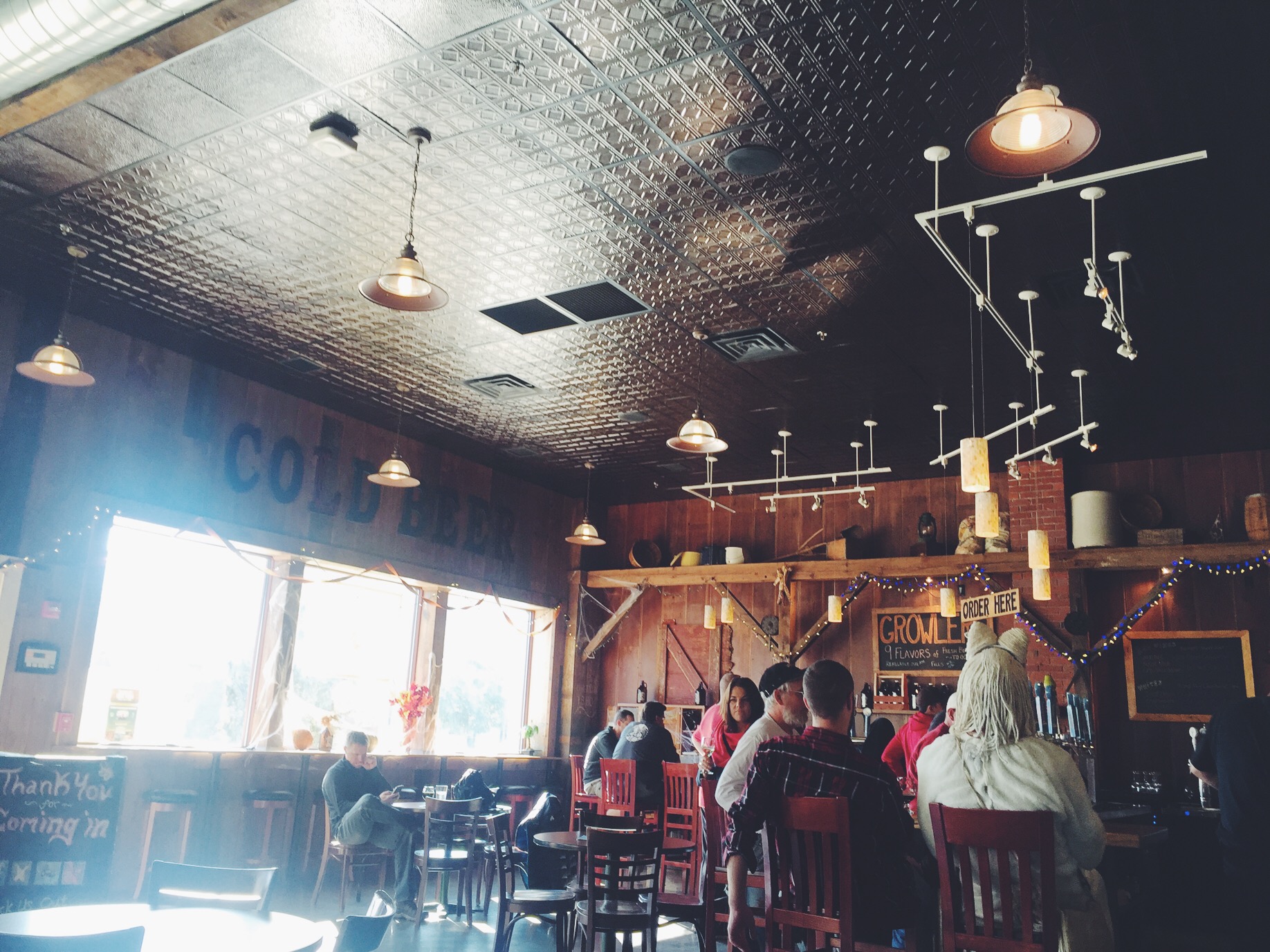 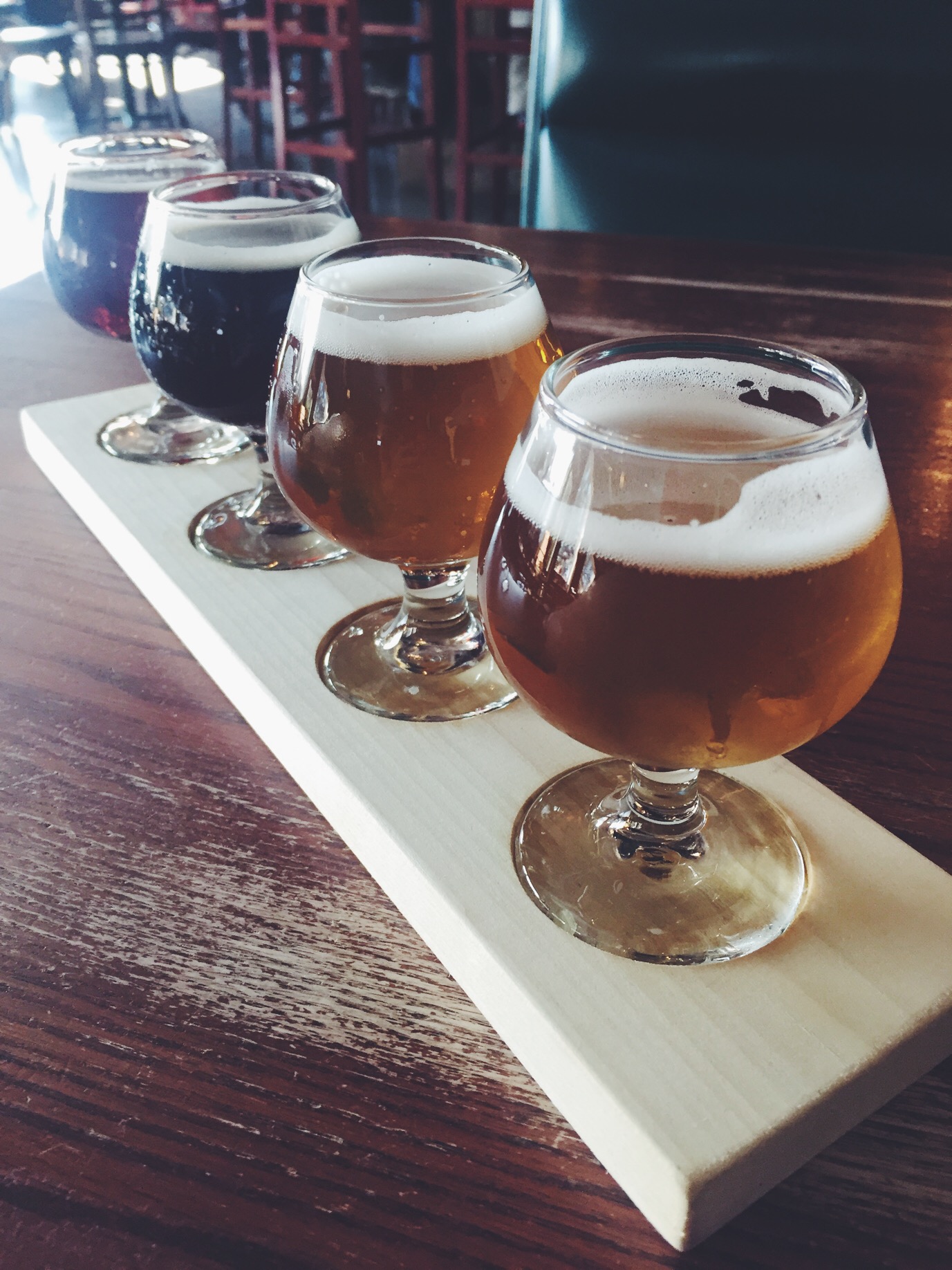 After our flights, we headed back to the hotel to hang out and rest for a couple of hours before partaking in the hotel’s pre-race pasta dinner later in the evening. It was quite a spread – salad, breadsticks, steamed veggies, and a pasta bar with several kinds of noodles, sauces, and toppings! It wasn’t free, but we did get a discount (15% off) with our race bracelets, and the selection/taste was much better than a lot of the free pasta dinners that other races have.

We spent the rest of the evening watching the Royals game, and of course had to lay out our flatties for the morning! We were in bed by about 11:00pm. 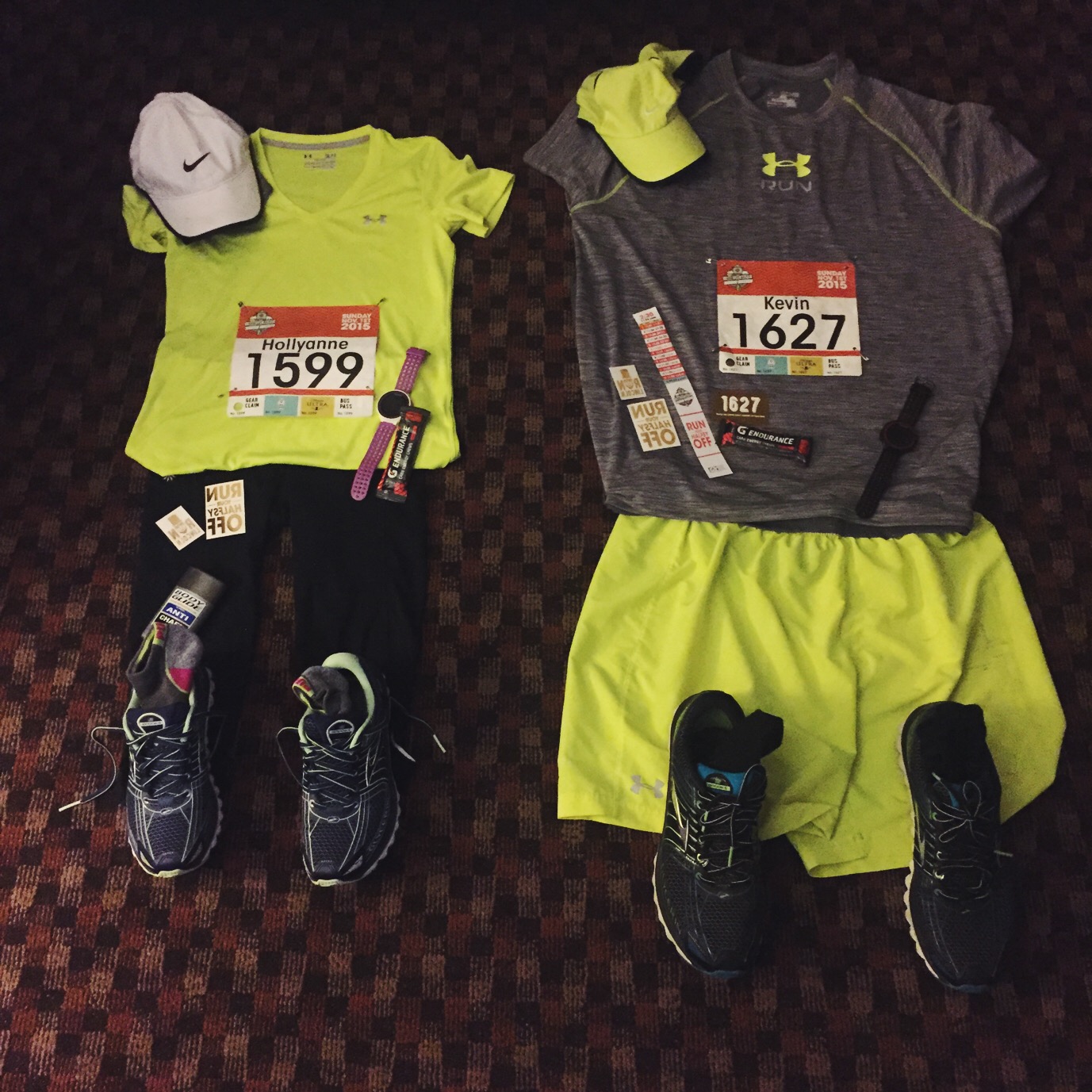 Thanks to daylight savings time and a 9:00AM race start, we didn’t have to get up too early. We woke up around 6:30, got ready, packed up our car, checked out of our room, and headed to the hotel breakfast buffet. We typically have a bagel with peanut butter and a banana for a pre-race breakfast, but we took advantage of the options and had bacon, eggs, potatoes, yogurt, and coffee.

The Good Life Halfsy is a point-to-point course, with shuttles offered from the finish area back to the start area after the race, so we had to get ourselves to the starting line. Since our hotel (and car) were near the finish area, we intended to get an Uber to the start so we wouldn’t have to deal with the shuttles afterwards. However, there were no Ubers to be found, so we decided to just drive ourselves. It was about a 15-20 minute drive to Seacrest Field from the hotel, and we were there by around 7:45.

For the next hour, we hung out with some other friends who were running as well, stretched, used the bathroom (the runner : port-a-potty ratio was great!), ate a banana, etc. It was a beautiful, unseasonably warm morning for November in Nebraska — it warmed up to about 75 degrees by the afternoon! At around 8:45, we started lining up by pace group, the national anthem played, and the race kicked off just after 9:00AM. 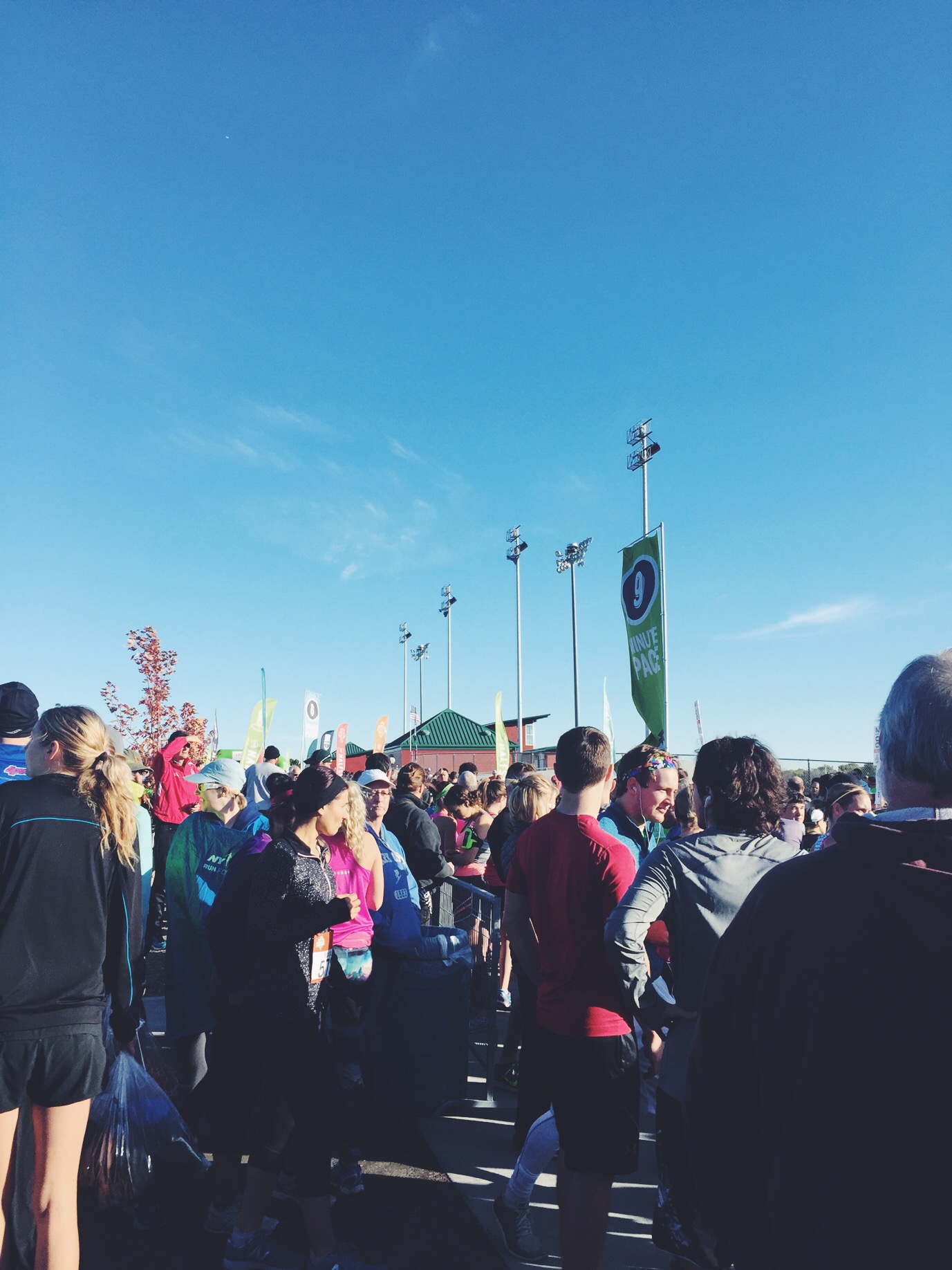 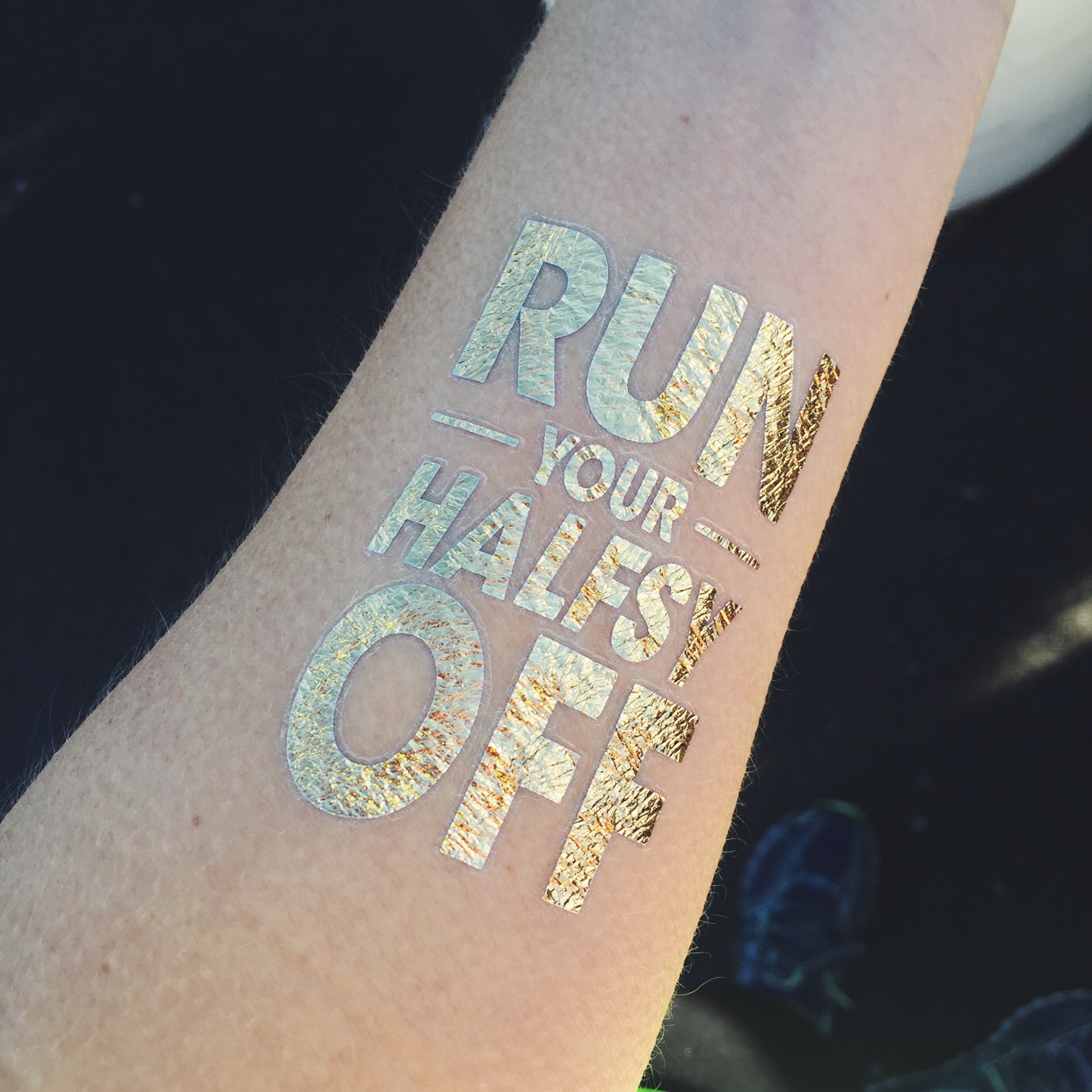 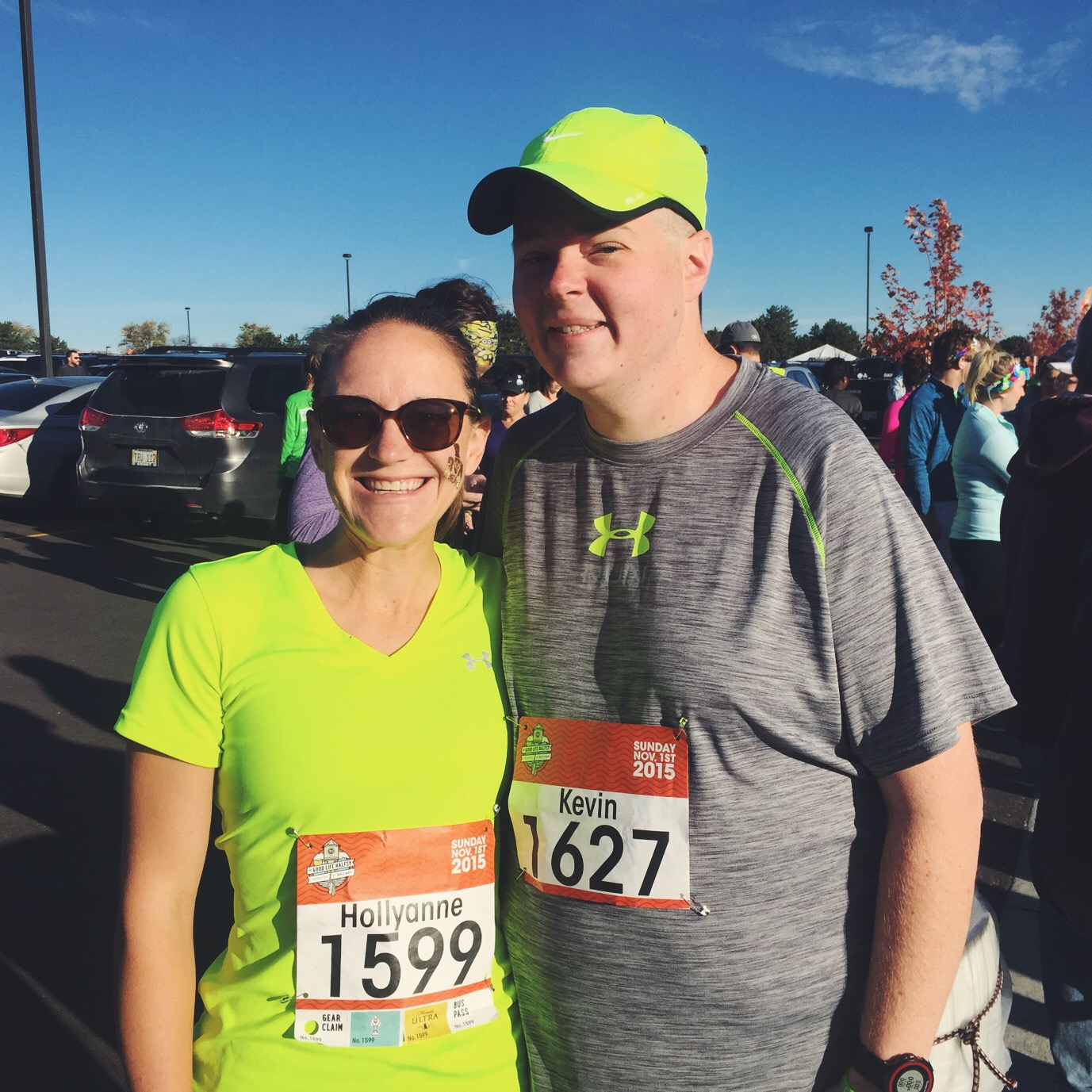 Here’s a short race recap from each of us:

K: As you all may know by now, I’ve spent nine half marathons chasing a time of sub-2:30. While I’ve set some PRs on a few of those attempts, I still could not seem to put together a race that would get me under 2:30. Coming into this race, since I was so focused on the Des Moines Marathon, I really had no expectations. It wasn’t until last week that I decided I would run around a 2:30 pace and just see what happened. I started off running with our friend Courtney, who was also attempting to run a 2:30 race. Here’s how it went down.  I ran a 9:59 pace for three miles. There was no need to run that fast, but it felt good. At about the 4 and a half point, Courtney told me to go ahead and she would run her own pace. I decided I would keep pushing to the halfway mark and see what happened. I knew if I could keep my pace under 11:00 minute miles I would have a shot at doing it. I came in to the halfway point at a 10:45 pace. I was pretty convinced at that point that, unless something went terribly wrong, I would be able to make it, but that I would still need to push it a little. As the race went on, the weather started heating up. I saw our friend Jeremy just past mile 7, and stopped for a Energy Singer. I started to chat for a minute and he made me keep running. It provided for a nice boost as I felt the energy zapping out of me. Every few miles there would also be cheer zones with lots of spectators, so that also helped. Just past mile 9, I saw our friend Vanessa who was coming back from a turn-around point, and then once I crossed the turn-around I saw Courtney was only a minute or so behind me, still looking strong. The last couple of miles got harder and harder, as my legs started to get more tired. During the last mile, I knew I had it in the bag, but my legs didn’t want to cooperate. I just kept pushing until we got to the final bridge, which was a killer! I slogged up the bridge (slow-jogged) and ran as fast as I could down into the finish! Final time of 2:26:32, beating my previous PR by SIX minutes!

H: Going into this race, I was still somewhat in recovery from my pre-marathon stress reaction “injury,” so I was planning to take it easy for this race and possibly run with Kevin. I’m not competitive with very many things, but I am competitive with myself when it comes to running. I was feeling good and knew I could run a semi-fast race, so when we started lining up, I stood by the 1:50 pace group. I wasn’t necessarily trying to PR (current PR is 1:49:31), but thought I’d try to stay with/near the 1:50 group as long as possible. Being a pacer is a tough job, and I’m grateful to the runners who volunteer to do it, but I was a little frustrated because our group started out way too fast. The first two miles were supposed to be 8:48 and 8:33, and they were both closer to 8:20, so by the time the 8:15/8:20 miles came in the middle of the race, I was already starting to feel burnt out. I hung with the group until about mile 10.5, and then slowly started to drop back a bit, but was still able to see them ahead of me for most of the rest of the race. My Garmin had been spot on the whole way, but somehow ended up about 0.2 miles ahead at around mile 11, which was a little disheartening. The last mile was pretty tough for me – I didn’t get that second wind that I often do at the end of races, and I had to stop several times for walk breaks. I knew I wasn’t going to break 1:50, or even beat my second best time (1:50:20), so made a new goal of beating my Des Moines Half Marathon time from around this time last year (1:51:50). I tried to muster a bit of a sprint to the finish line (downhill = ouch), and crossed in 1:51:09, for my third best half marathon time! It’s easy for me to be disappointed in myself, but I have to remember that I can’t PR at every race and for being injured and not running and eating like crap for the last three weeks, I ran a really strong and respectable race.

In the finisher chute area, we received our medal (that doubles as a bottle opener – I like this trend), and then had plenty of food/drink options available to us: water, gatorade, chocolate milk (favorite), granola bars, oranges, bananas, and Runza sandwiches (regional chain). A couple blocks away was the official post-race party in the Railyard area, where we could watch others finish, redeem our free beer, purchase race gear, hang out. We got our free beer, plus a donut from a shop in the Railyard, and rested our legs for awhile before heading over to catch a shuttle back to our car. 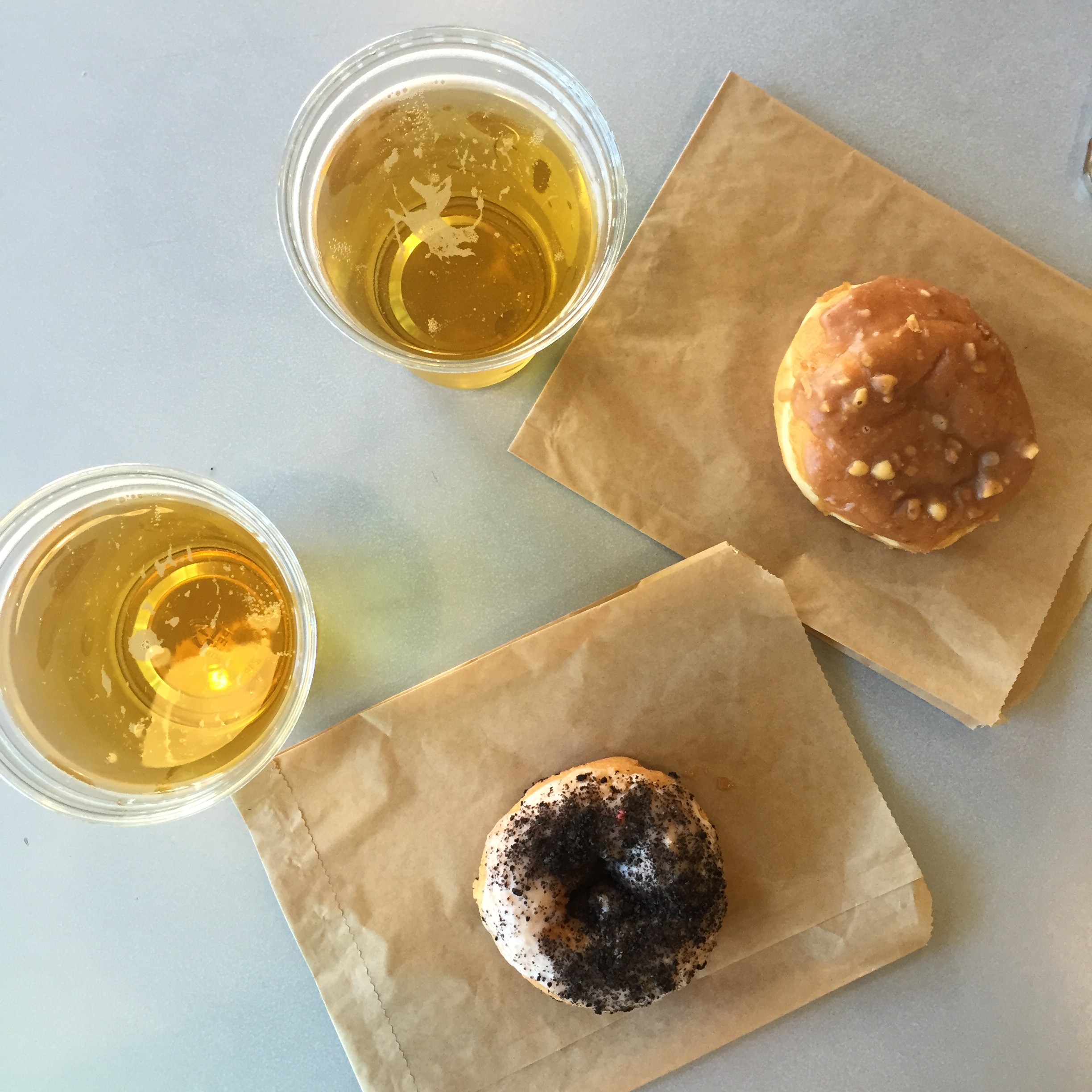 Overall, a super fun race that I’m happy we participated in! Our only complaints were that there weren’t enough aid stations in the first half of the course, and that the post-race beer was hard to find (important!), so there wasn’t much to complain about. The race t-shirt, extra gear available for purchase, pre-race communication, and race day organization were all excellent, so we will definitely be back in 2016 to run our halfsies off! 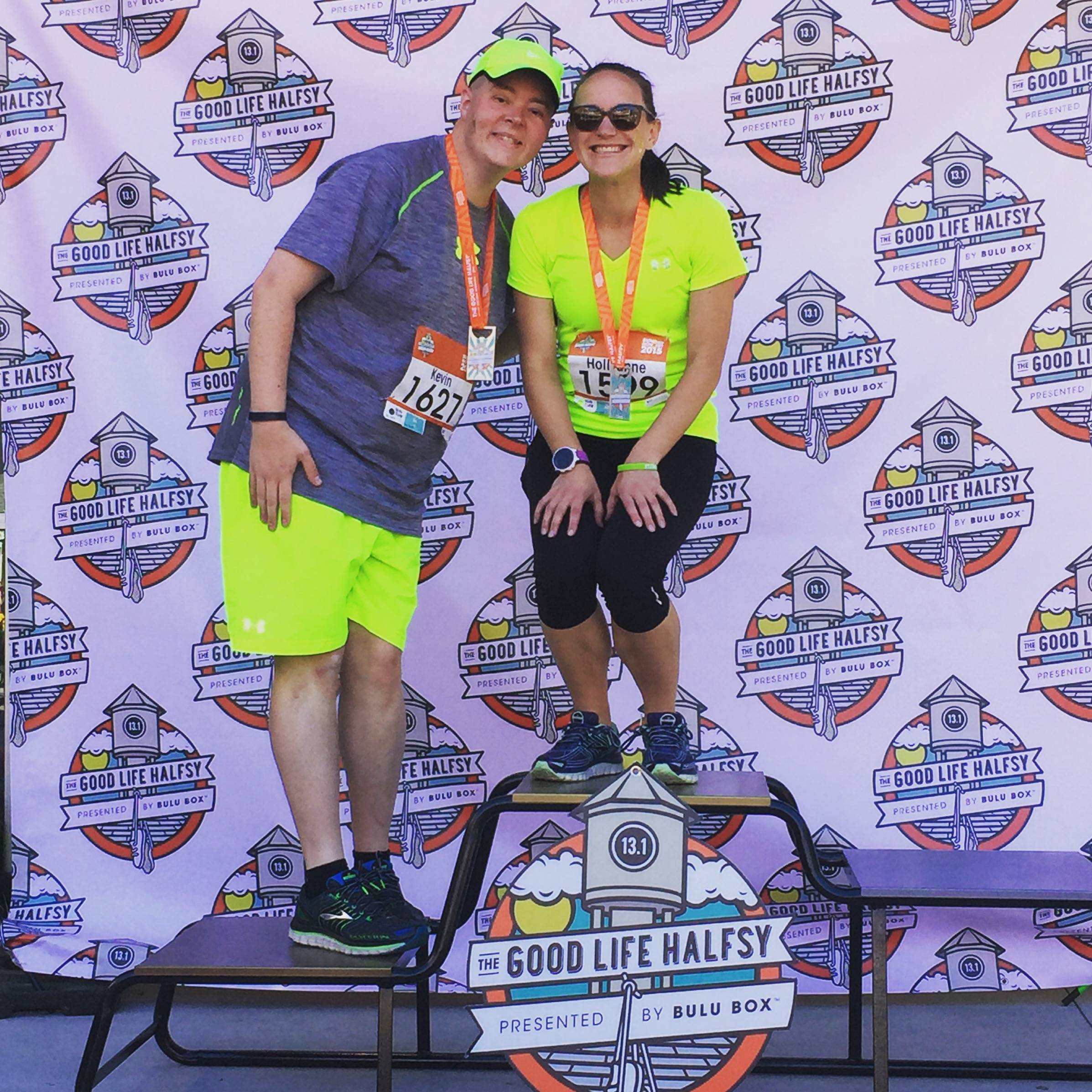 by Hollyanne Posted on November 3, 2015
This entry was posted in adventures. and tagged fall, lincoln, race recaps, running. Bookmark the permalink.