last weekend you may have seen our combined 1 million instagrams (sorry) from our trip to kansas city for the caffeine crawl. the caffeine crawl is basically organized bar-hopping…but with coffee, tea, and chocolate shops instead. the concept started in kansas city and has since expanded to cities all over the country. we jumped at the chance to go on this spring’s kansas city crawl, though, for an opportunity to check out a few lesser known and up-and-coming places that we hadn’t had a chance to visit before. read on for a few photos and short recap from each place we visited… 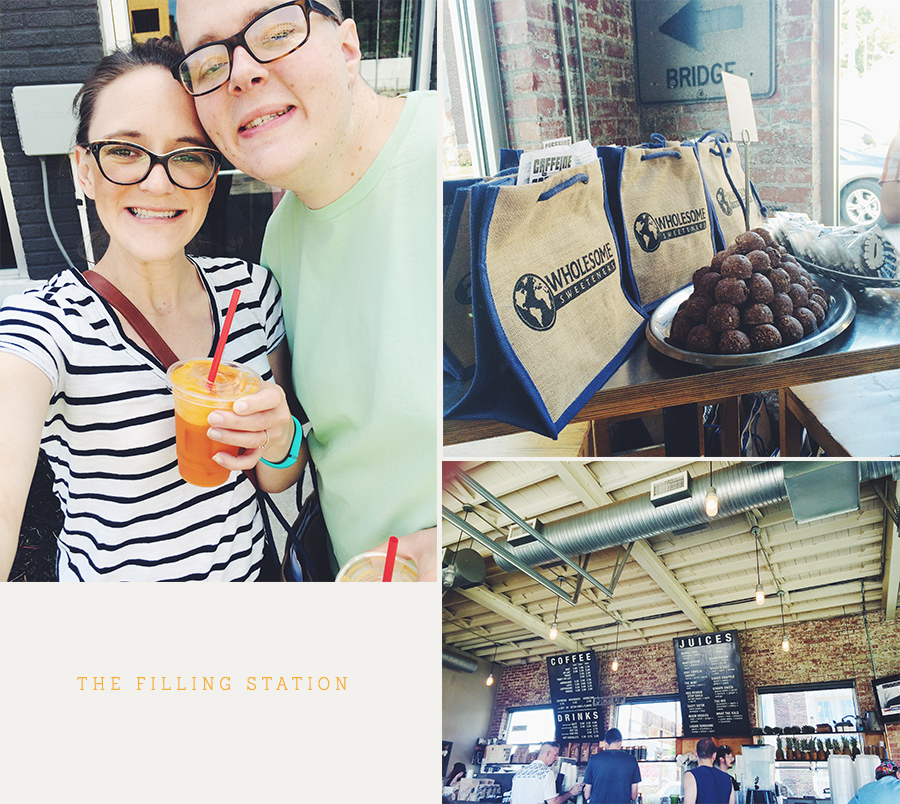 our first stop and where we met up with the rest of our group was at the filling station, so called because the building it’s in is a garage! we’ve been wanting to go here for awhile, so we made sure to choose a route that had this on it. they serve coffee here from some kansas city faves – oddly correct and broadway roasting – but for the crawl, they actually gave each of us a glass of one of their fresh-pressed juices, the “liquid sunshine” (carrot + strawberry + orange + lemon + apple). the juice was delicious, and a great way to start out a day otherwise full of caffeinated things. we got our goodie bags, met our tour guide, michael, heard a short presentation from one of the filling station staff, and were on our way to the second stop…

crows coffee, as you can see from the photos, is not quite open yet, but will be a great addition to the kansas city coffee scene once it does. the owner left his job in the corporate world to pursue his dream of creating community through coffee and the physical space of a coffee shop. we got a little tour of what the layout will look like once it’s complete, and it sounds awesome – lots of big tables and spaces to bring customers together and foster community. we also got to drink the shop’s first cups of coffee and espresso shots, provided by messenger roasting. we really enjoyed seeing crows in-process and look forward to checking it out again once they’re open. 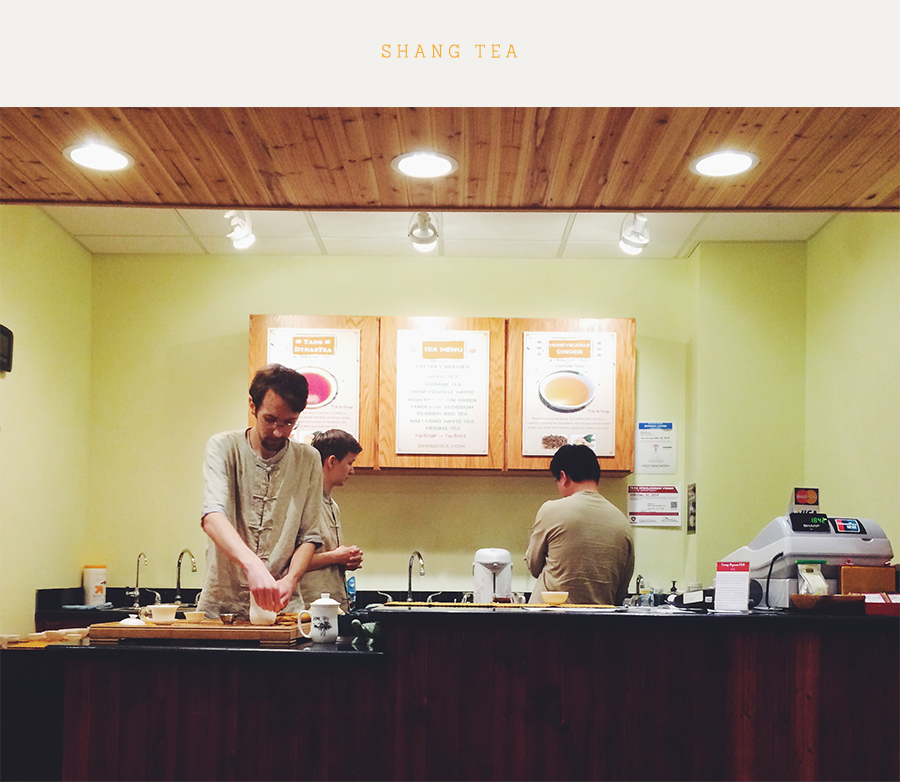 our third stop was shang tea, located inside crown center. neither kevin nor i are big tea drinkers, but we really enjoyed hearing about how the shop’s owner travels twice a year to china to oversee and even help with harvesting and preparing the teas that are sold in his shop. we tried a few different teas here, but my favorite was definitely the tangerine blossom, which we were told is quite rare and therefore fairly unique to shang. in addition to having various size bags of all of their teas available for purchase, the shop also had tons of adorable tea sets, mugs, kettles and more. 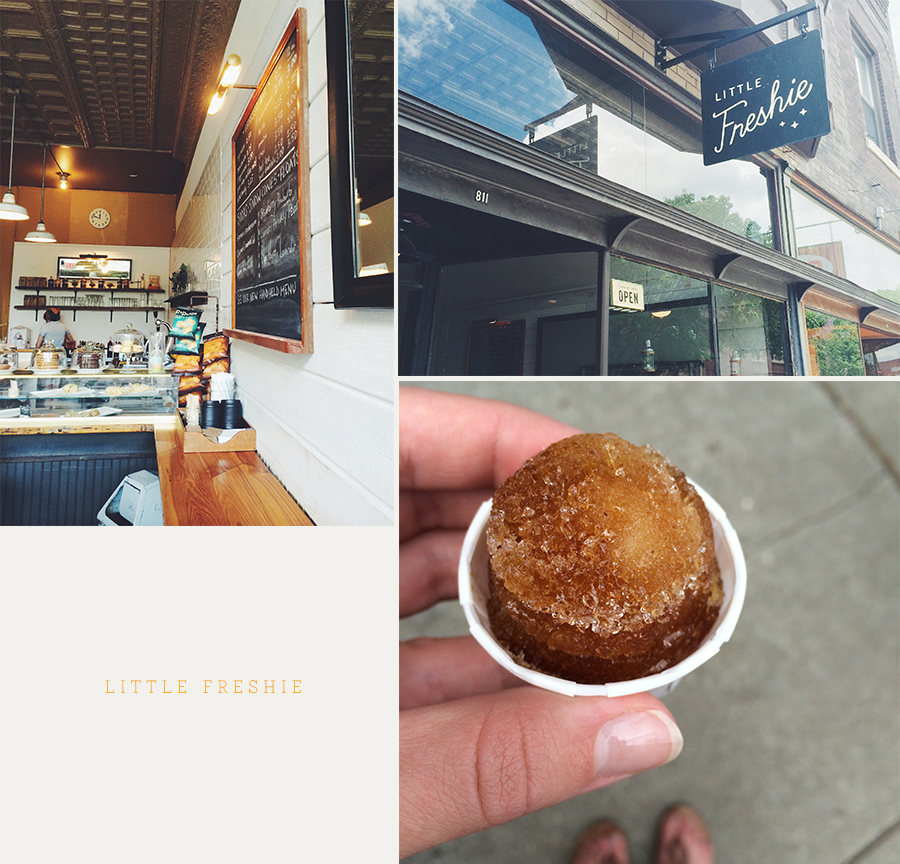 the fourth stop on the crawl was little freshie, one of two places on the tour that kevin and i had been to before. little freshie started out as a sno-cone food truck a few years ago, and has now expanded to a brick & mortar location with a full espresso bar, sandwiches, and of course, handcrafted snow cones and italian sodas with house-made syrups. lindsey, the owner, made each of us mexican toddy (iced coffee with spices) and strawberry rhubarb mini snow cones to order, and while both flavors were delicious, the strawberry rhubarb was definitely my favorite. we were back in the neighborhood later that evening, and tried their prickly pear flavor, too, which i’d also recommend.

quay is the other place that we’d been to before the crawl, and it’s one of our favorite coffee shops in kansas city (which is saying something – there are a lot of good ones). quay, like the filling station, also serves coffee from oddly correct, plus a rotating line-up of other craft roasters. we were supposed to listen to their presentation outside, but due to an impending torrential downpour, we moved to a back room, where two of their baristas made us two coffee mocktails – one a soda brewed with coffee on the kyoto, and the other a twist on a “flip” cocktail with egg white. at this point we were kind of wishing they weren’t mocktails after all the traffic and weather-related drama the morning had brought, but they were both delicious nonetheless and i hear both drinks will be on quay’s summer menu, due out soon. 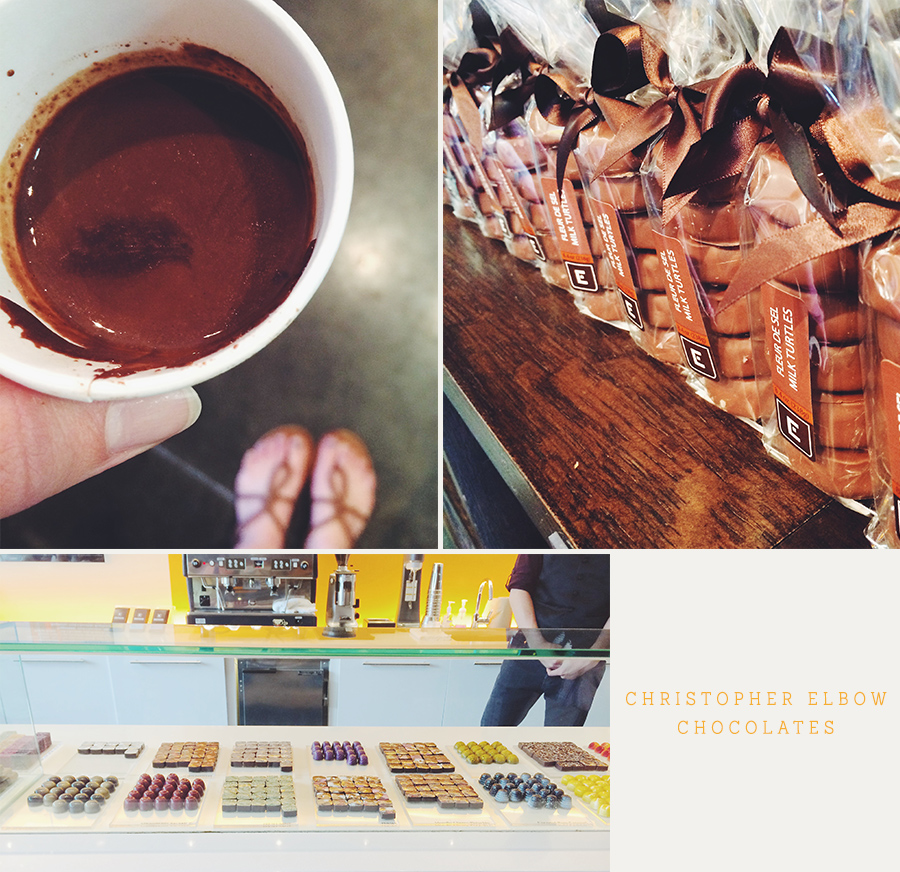 our last stop was christopher elbow chocolates, a gourmet chocolate shop that we hadn’t been to but knew about from their collaboration with boulevard brewing on chocolate ale. we got to taste a couple of chocolates, including a coffee caramel made specifically for the caffeine crawl. we also got to sample some of their liquid chocolate, which was basically really really chocolately and rich hot chocolate – so good. we learned a little bit about the chocolate making process (like how they get those cool designs on the tops of each piece), and even got to peek at some of the chocolatiers hard at work in the attached factory. a very neat place!

—
we had such a great time on the kansas city caffeine crawl, and are looking forward to visiting many of these places on our next trip there. for a list of upcoming caffeine crawls in other cities, and to see shops and cities they’ve visited before, visit their website.

by Hollyanne Posted on June 5, 2014
This entry was posted in adventures., food + drink and tagged coffee, kansas city. Bookmark the permalink.