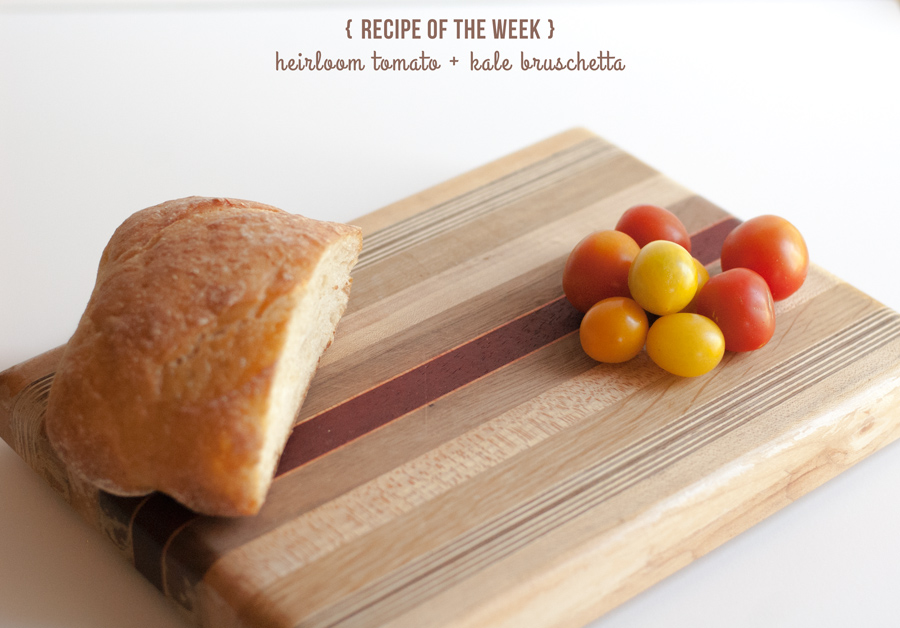 we eat at geriatric dinner hour over here for the most part. as in, 90% of the time kevin is totally off the hook for preparing any part of dinner because usually by the time he comes home around 5, i either have something in the oven or, more often, already plated on the coffee table with a beer open and netflix cued up. yes, my feminist self is cringing, too, and yes, we watch tv while we eat dinner nine times out of ten because we don’t have room for a proper dining room table. #dormlife

even though we eat “dinner” early, it’s usually not normally what i would consider a full meal. over the last couple years, we’ve pretty much adapted to the 5-6 small meals versus 3 normal-size meals style of eating, so dinner is usually more like a glorified snack. i’ve grown to prefer it this way because if we want to hit up a happy hour later, or get dessert, or have a midnight snack, i don’t feel quite as guilty. so, that said, we usually end up eating something else later in the evening – sometimes just a greek yogurt or a piece of fruit, or chips and salsa. but yesterday, i had just gone to the grocery store and filled our fridge with lots of yummy things so we decided to make ourselves something a little more exciting and substantial for our 8 o’clock snack: bruschetta! 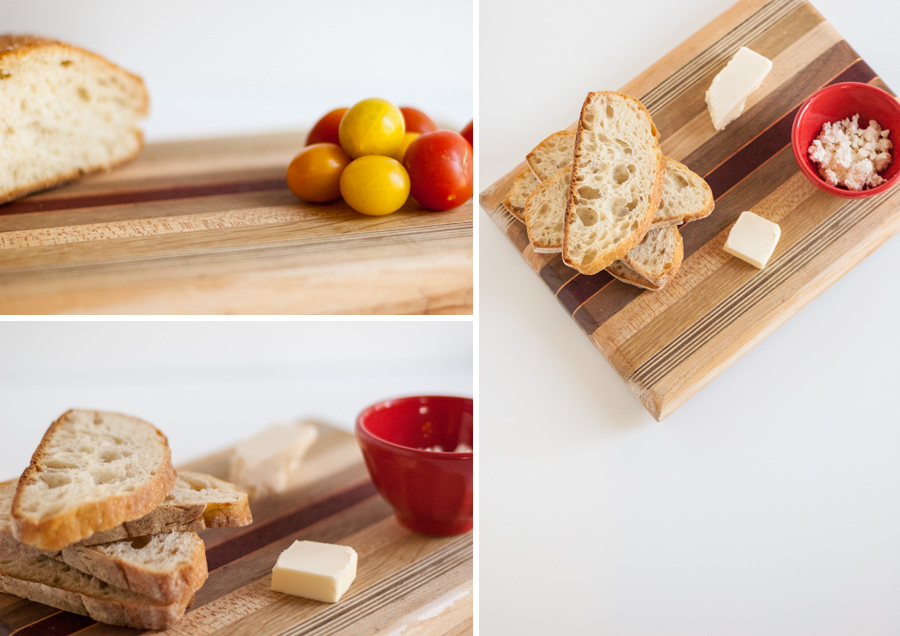 if there are any hardcore italians out there reading this, you might be screaming at me in a couple minutes because i don’t really know what technically qualifies bruschetta as bruschetta,  but in my mind, it’s just anything you choose to put on toasted, delicious bread. i didn’t rub this with fresh garlic like you’re supposed to because, well, we were hungry, yo! ain’t nobody got time for that! and with the buttery-ness of the bread, crispy-ness of the kale, sweetness of the tomatoes, and tangyness and saltiness of the cheese, this was chock full of flavor and didn’t miss the garlic one bit (though you could definitely add it).

we devoured this pretty quickly last night, and it’s definitely going to be a new staple snack and light dinner for us around here, especially since the farmer’s markets are staring back up in omaha this week (moment of silence for all of the non-local, pesticide-ridden vegetables we’ve had to consume over the past 6 months) and fresh tomatoes and greens will soon abound. this would be the perfect summer dinner party appetizer, along with some grilled shrimp as an entree and a good bottle of cava. 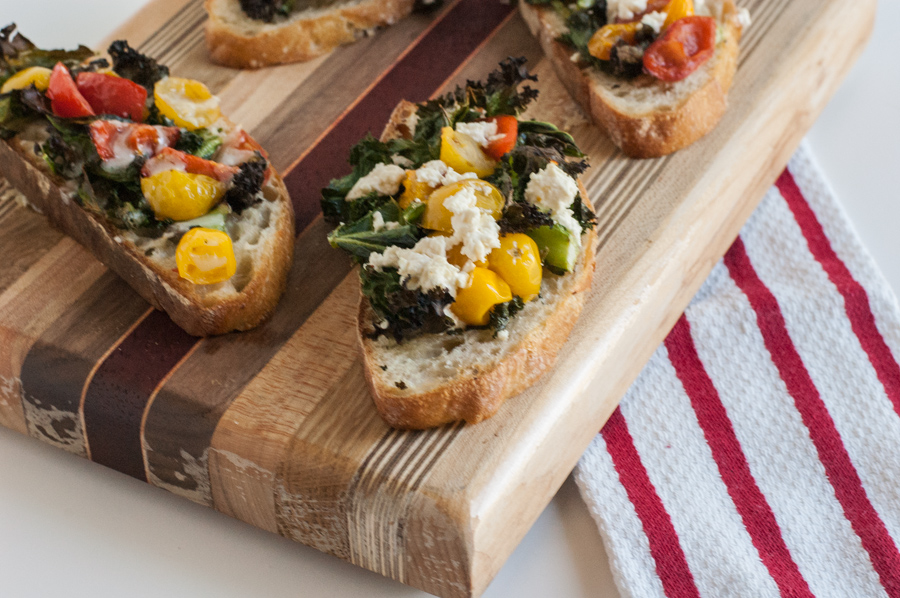 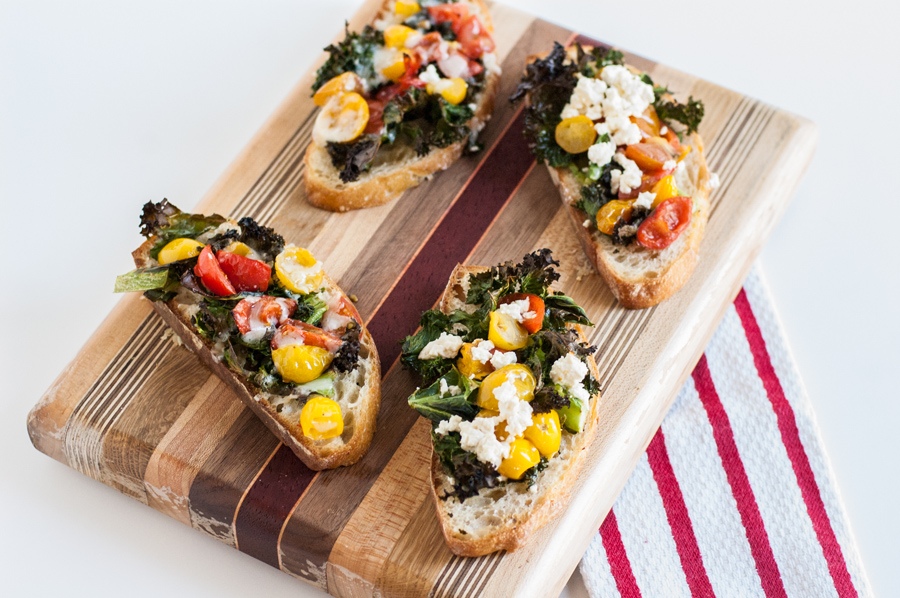 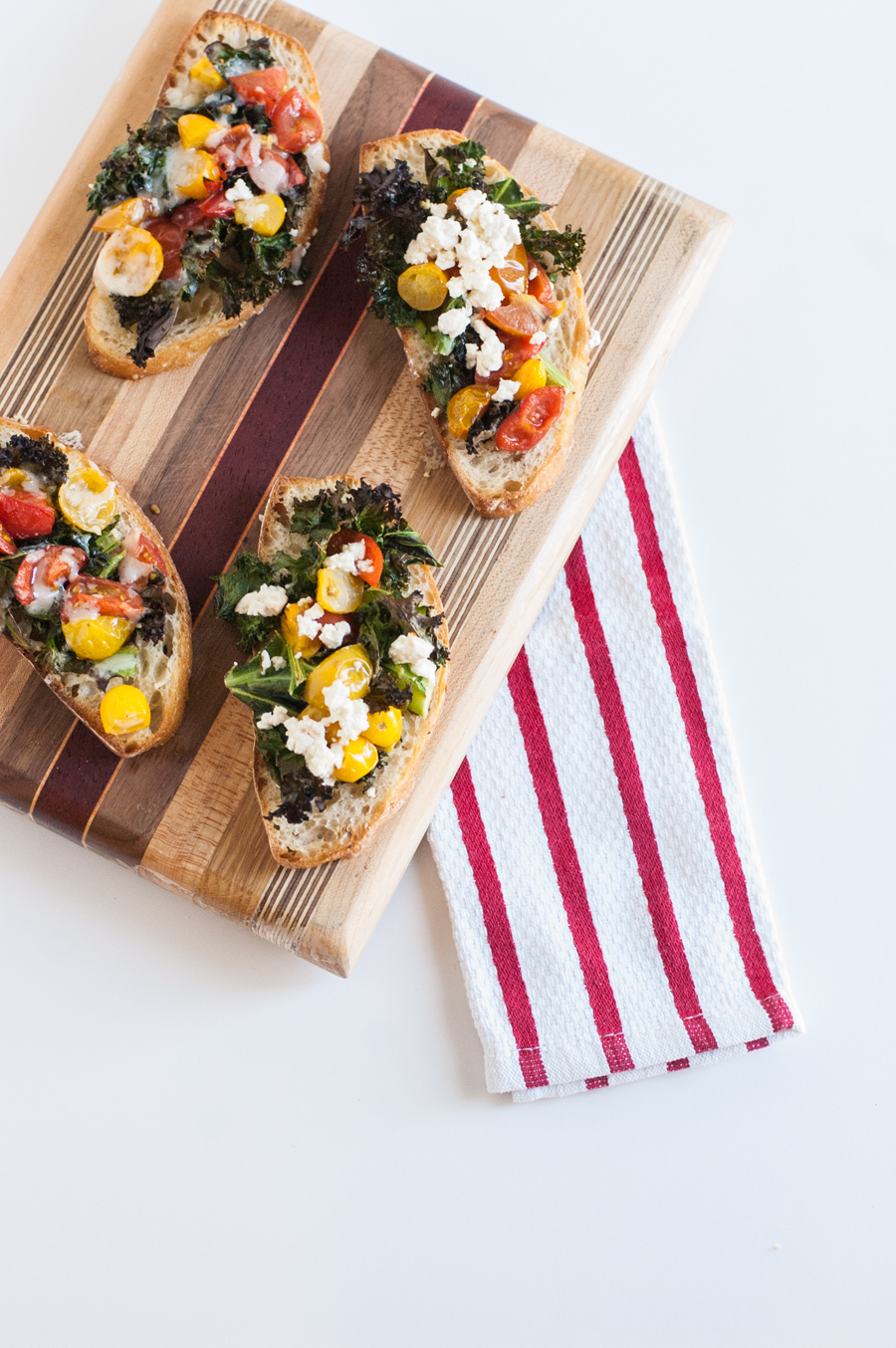 directions:
1. preheat oven to 400 degrees. place kale and tomatoes on a foil-lined baking sheet, and drizzle or spray with olive oil. season with salt and pepper. bake in the preheated oven for about 8-10 minutes, until tomatoes are a little juicy and kale starts to crisp up.
2. while the vegetables cook, prepare the bread. cut four slices of your chosen bread, and spread a thin layer of butter or margarine on each slice.
3. remove vegetables from oven and turn your broiler on. remove the foil from the baking sheet so you can use the same sheet to build your bruschetta. grease the baking sheet with cooking spray, then place bread slices on the tray. first add kale, then tomatoes, and then top each slice with a little bit of cheese (we did feta on two, and aged cheddar on two, but you can obviously use all one cheese, or two cheeses on all your slices, or even no cheese at all).
4. place in the broiler for about 2 minutes, but keep a close eye on it – some broilers are faster/hotter than others. remove from oven, season with additional salt and pepper if desired, and enjoy immediately!

by Hollyanne Posted on April 25, 2013
This entry was posted in food + drink and tagged eat your veggies, recipe of the week, recipes. Bookmark the permalink.