our living room has been kind of a mess since christmas. when we took down the christmas prints we had on hangers after the holidays, some of them chipped paint off the wall and made some pretty ugly holes. we also had a couple of nail holes that we weren’t planning to use anymore. before putting any of our non-holiday decor and frames back up, i wanted the wall to get patched up and painted over so it looked nice again, and up until last week, we were waiting on maintenance for that. yep, 3 months.

when we lived in tucson, we had a couch that we really liked, but we ended up selling it before the move to downsize because this apartment is technically furnished. unfortunately, it was furnished with a very comfortable, but very puke green-brown color couch and love seat set. we had the love seat moved to storage right away because this living room really isn’t suited for two couches, but we’ve made do with the sofa. since it’s actually really comfy, we toyed with the idea of having a slipcover made, but in the end that seemed like a waste because eventually we’d move out and have a useless slipcover. we finally decided that because we would eventually be moving off campus and would need a couch, that maybe we should start looking for our own again and invest in one we can have for a long time, both here and when we move.

i really wanted something mid-century modern, and we quickly learned that so does everyone else, so they’re expensive. although i love the options at places like cb2 and crate & barrel, they were just waaaaay too much. reluctantly, we decided to look at nebraska furniture mart, even though i was pretty convinced they wouldn’t have anything modern enough. but whaddaya know, the mart has an “urban living” section downstairs that we’d never noticed before, and we actually found several couches that fit the style criteria we were looking for. we finally landed on the one you see in the photos because we loved the style, it was comfortable, it was one of the colors we were looking for, and it was at least 50% less expensive than any other sofa we’d seen online in that style.

suffice it to say that i’m basically in love with it. it’s our first big furniture investment, and i’m 100% happy that it’s what we decided to go with. i love that it has a lower back, so it makes our small living room seem bigger. the other couch was massive and took up way too much space. i learned recently that to make a room look bigger, make sure all your furniture is off the ground, so i like that this couch has modern legs that elevate it a little bit and keep your eyes moving. 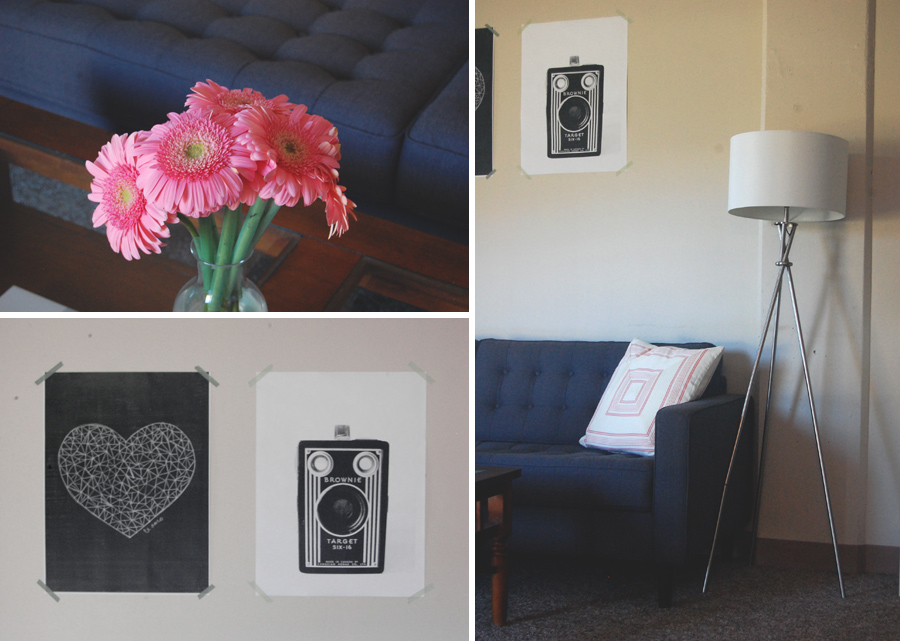 after the couch arrived came the little bit of decorating that you see here. i couldn’t really decide what colors i wanted the accents to be, so finally we just went out shopping to see what we could find. we ended up getting both of the throw pillows from tj maxx and the striped blanket from target. as for the lamp…i’ve been wanting to get a tripod lamp for awhile now, ever since seeing this one at west elm. i wasn’t quite ready to make that investment, and was feeling a little sad about not having a lamp that matched the new space, but then we happened upon the target version for $50 and are settling for that for now.

the two posters behind the couch are blown up engineer prints from staples. the camera print was free from a blog i follow, and the heart print was a $5 digital download from caravan shoppe (link at the bottom of this post – they have tons of amazing art that can be printed in large format). i don’t know where staples engineer prints have been all my life, but they’re awesome. basically, it’s a black and white print on really thin paper for super cheap. it’s definitely not photo quality, but it’s the size that makes the statement in this case. they have a range of sizes all the way up to 36″ x 48″ i believe. we got both of ours printed at 18″ x 24″ and the total was around $3.50. yes, that’s it. i know. go get one right now!

we’re actually going to be moving buildings in the next couple of months, so i just hung the prints with washi tape. in the future, i might look for frames for these or look into custom framing or some other more permanent mounting solution. you could definitely splurge on custom framing with these since the actually art is very inexpensive.

the space is still coming together, but it’s already ten times better than what it was just a couple of weeks ago. i’m hoping to add a few more elements still – things that aren’t necessarily permanent or hard to move – like some big house plants perhaps.

by Hollyanne Posted on April 10, 2013
This entry was posted in house + home and tagged home, mini makeover. Bookmark the permalink.

One Response to living room update.